How can I tell if Nintendo Wii accessories are genuine/official?

The Wiimote and Nunchuk resale market (e.g., Amazon/eBay) varies between questionable and legit. Many reviews complain about scam products mixed in with resale of certified genuine hardware. What are the easiest ways to visually tell official Nintendo Wii Remote Plus and Nunchuk hardware apart from knockoffs if a scammer tries to pull one over on me?

Sadly, the bad fakes are pretty obvious, but the good fakes are nearly indistinguishable from the genuine article.

There's a few easy ways to spot a "bad fake:"

On the other hand, visually inspecting a "good fake" is much, much harder. I've got some replacement DS case parts that look absolutely identical to the original model. I assume that security in many of the factories that produce these items is relatively lax (or the intellectual property rights aren't completely enforced) because I could swear they came from the same molds the original parts did. There were even compliance and serial number labels in the proper places, and they fit just fine with the other case parts I had from my broken DS.

In your case, I looked up images of the "fake" Wiimotes that are floating around, and found some photos in this thread where they were pretty sure they got a counterfeit, but it looked practically identical: 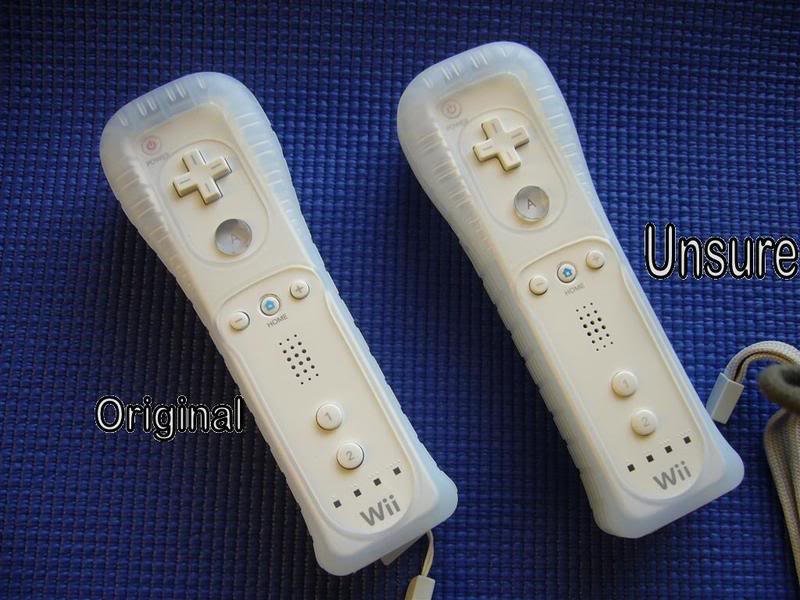 (mirroring the image here, since I had trouble accessing the site & had to hit a google cache - apologies & credit to the original poster, crashcraz3)

As you can see, they're virtually identical from a visual standpoint - the differences were only noticeable when it was in use. (The speaker was too loud, the tracking was off, and the LEDs were too bright)

If you're concerned about fakes, I'd stick to buying from reputable sellers who have clear return policies and plenty of positive feedback. Buying from the lowest bidder on eBay/Amazon/etc is likely to give you a high probability of being stuck with a counterfeit item.

Not the answer you're looking for? Browse other questions tagged nintendo-wii wiimote or ask your own question.

6
Any way to extract music from Nintendo Wii Games?
29
What is the biggest SD memory card a Nintendo Wii can support?
11
Wii controllers keep losing connection. What can I do?
15
How do I turn off Wii remote sounds?
8
Were there any known defects with the Nintendo Wii?
0
Would an old Nintendo Wii remote work with a Wii U (without the gamepad)?
2
How do I know by looking at the Wii game case which type of controllers are necessary/optional and in what quantities?
0
Are unofficial Wiimotes a good alternative to official Nintendo ones?
51
How can I tell if my Wii Remote is counterfeit? (with pics)