How does the Restless Giant rune work?

The description on Blizzard's site is a bit vague:

This seems to be saying that the Gargantuan will attack at roughly 1/3 of his normal rate, but do twice his normal damage. Or is it 200% weapon damage (which would be a very nice boost over the Gargantuan's normal 25% damage)?

Is this a triggered effect that occurs when you have a Gargantuan out (i.e. it has normal stats until the effect triggers)? I've heard that it may trigger under other circumstances besides the elite enemies (one rumor was that 5 or more enemies in melee could trigger it). If it is triggered, what can cause it to trigger?

I finally got this rune, and tested it out.

I can confirm that effect is triggered, and that it will trigger off of large groups of normal monsters as well as bosses and elites, although it seemed to take more than 5 monsters before the effect was triggered. Exactly how many more I could not be certain of, because the monsters were already dying by the time I saw it trigger.

It seems to attack quite a bit faster than normal, so I'd say the 35% attack speed is a 35% bonus, rather than 35% of normal attack rate.

The buff lasts about 15 seconds.

All in all, this is a pretty nice buff.

The in game tooltip includes the full text, which confirms what Beofett saw. Those with interest in PvP in the future should not that other players will trigger this as well. 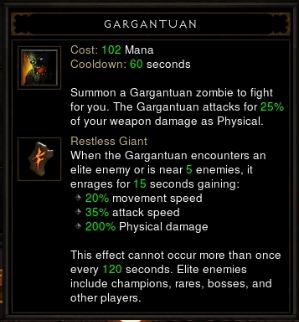