Where can I most efficiently buy all items for the "Shut up and take my money" achievement?

The "Shut up and take my money" Achievement requires that you buy one of each item from merchants. There are a lot of items on the list that my class doesn't use, and I am unfamiliar with. Is there one vendor, or a short list of vendors I can go to in order to buy one of each of these items types? Also, since I plan on just selling many of them right back since they are of no use to me - generally, where can I buy each item the cheapest? 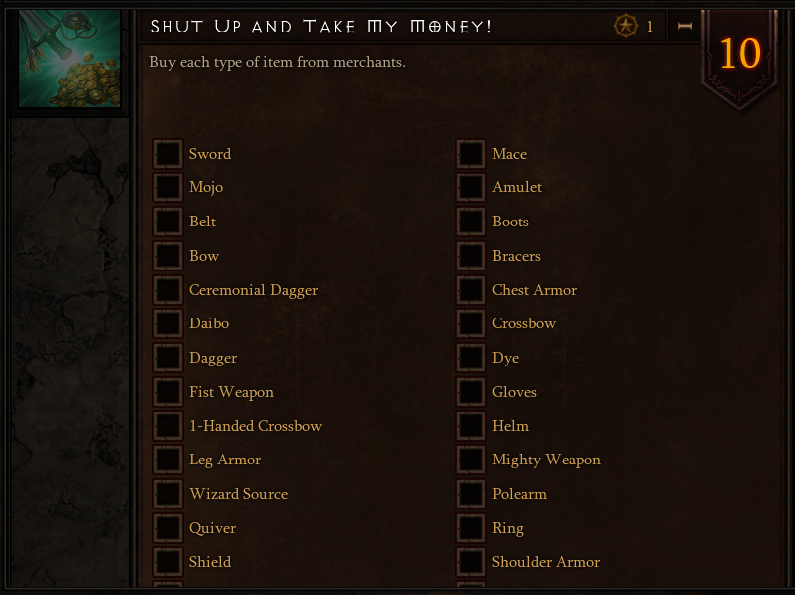 When I started doing this I checked vendor for white items each time I was in town to sell. Since white items costs only for a few hundred gold compared to the blues which costs over thousands. However what I found was you had to buy blue rings/necklaces. As of now I am having trouble finding a merchant that sells Spirit Stones.

Also a tip is to buy it on normal mode since those are the cheapest and you might consider buying the blue ones there if you don't want to wait.

Spirit stone and mighty weapons will not be sold from regular town vendors , but only the random spawned vendors

You can get a mighty weapon from Kyr the weaponsmith. He appears during a random event. After passing through the Halls of Agony level 2, you will sometimes find him on the highlands passage. Complete his event and gain access to his shop, where you'll find a mighty weapon for purchase.

If you want to farm this, you might want to go to A2 and start the Evacuation of Caldeum quest. This way, you'll have four vendors all very close together that you can check one after another.

But what I did was just to check for white items every time I stopped at a vendor, and then buy and resell them, until I had almost all of the items checked off, before I started concentrating on the last few.

There's a relatively good guide for this in the comments at D3DB:

NEW TRISTRAM, Arghus the Collector. He sells: Wand and Bracers.

CALDEUM BAZAAR, Lugo the Miner. He sells: Dagger and Mace.

CALDEUM BAZAAR, Squirt the Peddler. She sells: Daibo and Polearm.

DAHLGUR OASIS, in the Rotting Cellar, Javad the Merchant. He sells: Spirit Stone

Note that Javad the Merchant won't always have Spirit Stones. The Wandering Tinker merchant occasionally has them. Vendel the Armorsmith usually (but not always) has them.

I think that this guide found an amulet at Silmak the Fence (Neck). Amulets and Rings are on the jewelry tab rather than the armor tab. Squirt the Peddler is also in the Hidden Camp now.