How can I determine the quality of a socketed gem?

Since learning that unsocketing destroys neither the gem nor the item, I have been socketing like it's my job. Unfortunately, now I don't remember which quality gem went in which item. I'd rather not spend 420 gold just to learn I can't yet upgrade the gem. Is there any way I can tell which quality the gem is while it is still in the item?

You can typically tell what gem is present in an item by looking at the shape of the gem, though it is shrunk somewhat on the gem image within the socketed item. There will be some that are hard to tell - every "refined version of the previous shape" level is going to be hard to tell apart when shrunk down.

The mod of each gem placed in a socket will be shown on the item, so you can derive exactly what's in that socket by looking up the mod. For example, I've got two +18 Int gems in the following, which I can look up to be Flawless Topazes on the Gem site. 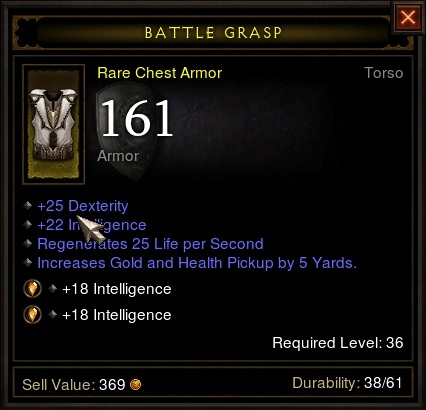 9
Can you remove a gem from gear?
14
What gem bonus applies to socketed off-hand items?
6
The foul depths of the Quality Well
11
Are there any game mechanics that affect gem drop quality?
5
How can I fairly compare a socketed and unsocketed weapon?
3
How can I determine the effective Protection from a shield?
4
Damage modifiers in Diablo 3 items?
10
Where can I find “Ascended” items for level 70 legendary crafting?
1
Which weapons can be socketed with a Gem of Ease for powerleveling?