As far as I can tell, when you use Wave of Light, it seems to often miss the first object in front of you.

Can it not damage anything that the bell actually lands on? Even though it seems like when I use it I move very close to the targeted enemy.

Do I need to do this attack from a greater distance?

The way the skill is worded (see below, emphasis mine) seems to make it clear that the bell falling does the immediate damage, and then the line of damage goes out from there.

I do not know if the radius of the initial damage is known. It could be that you are pointed in slightly the wrong direction, or that you are actually running slightly past the enemies before triggering the ability. It's also possible that, due to latency, you or the monsters are not exactly where you appear to be on your monitor.

But I think based on the description and animation that the initial damage is intended to be at melee range, under the dropping bell.

It's usually about the size of the small imps the Fallen Prophets resurrect, so most larger monsters will get hit by the Bell regardless of where they're standing, although smaller monsters can get close enough to not be hit by it. 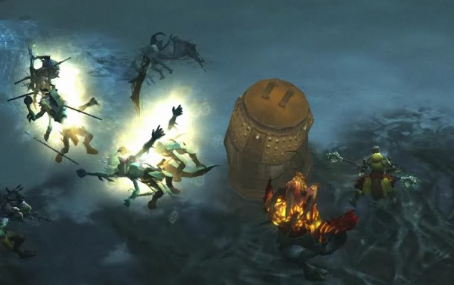 Not the answer you're looking for? Browse other questions tagged diablo-3 diablo-3-monk or ask your own question.

50
How can I see more detailed information about my skills?
1
How do I manipulate where the Skeleton King teleports?
2
How do I use Guiding Light?
22
How can I find the ancient device with less searching?
2
For Wave of Light - Blinding Light, what attacks does it trigger on?
7
What are the spirit-generating mechanics for Crippling Wave - Rising Tide?
2
How do I resolve this desync issue?
8
What's up with Snitchler, the giant treasure goblin?
4
How do people kill like crazy?