How does Hex work? 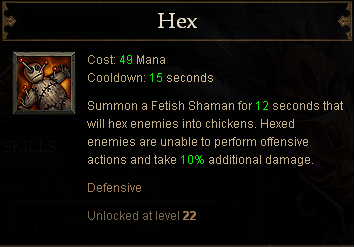 There are a few things about Hex that I'm uncertain of:

Did some testing after you asked this. The tests went as followed:

Method: I went outside of New Tristram and used the Hex ability (unruned) against the zombies there. I unequipped and reequipped INT and Attack Speed items, as well as my weapon to test if there were any changes in duration or rate.

In a group of enemies the Fetish Shaman will:

With a single target the Fetish Shaman will:

Running several tests with a Stopwatch on my Android I found that:

Additionally, changing my stats around (adding Attack Speed and INT, and changing my weapon) appeared to have no effect on how long the Fetish Shaman is active or the duration the target is Hexed.

I'd also like to note that there can be a short delay between the Fetish Shaman spawning, and then using the polymorph ability. Which is why he may only Hex a single target 2 times instead of 3. 5.5s * 2 = 11, so if the Fetish Shaman takes a second to cast on spawn he'll miss the chance to polymorph the target a third time before he despawns.

53
How can I see more detailed information about my skills?
9
Do attacks that hit multiple enemies (or one enemy multiple times) generate multiple on-hit triggers?
8
Why has my enchantress been turning me into a chicken?
8
How does the "Companion" skill work?
3
Does the Monk passive skill "Resolve" stack with multiple Monks applying it?
8
How can I detonate my chicken?
10
How does Frozen Orb work?
1
Does Essence Burn include the explosion damage from Exploding Palm?
3
How does attack speed affect damage for various skills?
4
How do people kill like crazy?