When comparing weapons or armor, what should I look at?

I am more of a serious gamer than a hardcore Diablo III player. This is nice in that the game is very accessible to all levels of gamers from casual to hardcore. However, I find some of the statistics in the game, especially those around armor and weapons, a little daunting. Having a big armor number is nice but it doesn't seem to take into account the other affects an item may have.

When I am comparing two weapons or two pieces of armor, what are the very basic stats I should be looking at to see how they differ from one another to properly evaluate them? I am just looking for 2-3 things that I can take a quick look at and be able to determine a final yea/nay on if the items helps or not. I realize this will properly differ depending on class or how you want to play a character but I am looking for the baseline stats that may apply across all options.

When you're comparing armor and weapons, there's a number of things you should consider. 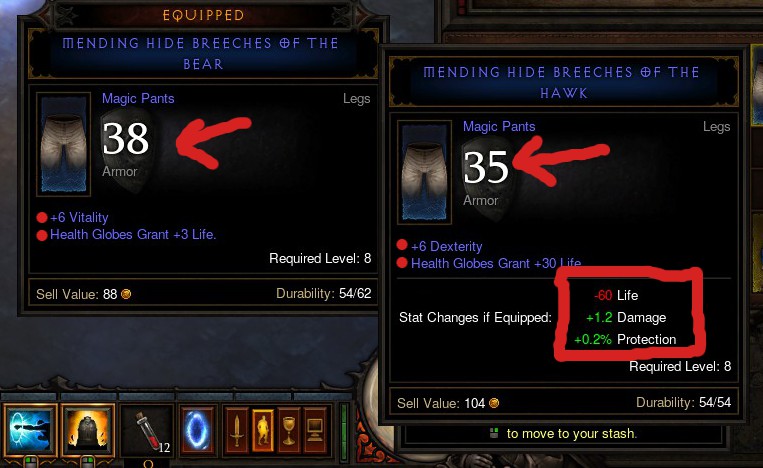 The first is the basic stat of the item - this is typically in large print. On armor, this is the "armor" value, and on weapons, this is damage per second (or "DPS" for short). Generally speaking, the higher the level/tier of weapon or armor, the larger this stat will be, although there's a bit of variance in each tier. It's a good general bit of information, but once you start adding magic, rare, and legendary items to the mix, you're going to have more things to consider.

The second thing you should note is the effect the item has on the three stats that are called out in the item's tooltip. These are life, damage, and protection.

If you're just playing on normal, and aren't serious about maximizing your character, you can probably just look at these three numbers - they're highlighted in green if they're better, and red if they're worse. If some are green and others red, you'll have to decide if it's more important that a fight ends quickly, or that you're more likely to survive if things go south.

Watching these three numbers is likely enough to get you through the game on Normal. When you start finding gear with multiple enchantments, or you start shopping the auction house, you're going to want to be a bit more specific. Here's a few things to keep in mind:

Watch for items that increase your primary stat.

Your primary stat varies depending on your class, (Strength for Barbarians, Dexterity for Demon Hunters and Monks, and Intelligence for Wizards and Witch Doctors) but it's directly tied to how much damage you deal. Increases to this stat are generally taken into account in the comparative "damage" stat I talked about previously.

Note in the photo above that my damage is increased by equipping pants - this is because I am playing a monk in this screenshot, and the pants have +6 Dexterity. I'd have to decide if this damage boost is worth the loss of +6 vitality (= 60 life) or not.

The other stats will tend to give you secondary bonuses, but your primary stat is one of the most important things a piece of gear can give you.

What's useful is going to depend heavily on your character, but things like bonus experience or additional gold from enemies are almost universally good. Depending on how and what you're fighting, you might prefer a pair of boots with faster movement speed to get away from enemies, or perhaps something with high Vitality so that you can stay longer in a fight without needing healing.

Although increasing rarity from magical (blue) to rare (yellow) and to legendary (orange) generally indicates better items, this is mainly because they are able to have more enchantments, or they have special/unique properties.

If the enchantments don't match your character or your build, they may not be better, even though they're more "special."

The three item comparison stats have been revised since D3's initial release.

Damage stat includes all sources except "active" skills and the protection stat now reflects resistances and so is equally reliable. Protection stat also includes life as well so the life stat should be lowest priority when deciding on which item to choose with damage and protection being more greatly weighed, and weigh against your overall grand totals on your character screen as well as evaluated against any apparent deficiency observed during gameplay that may result from char build design or game conditions, single vs multiplayer, monster circumstances, etc.

The one problem with the protection stat is that it still doesn't take into consideration shield block. Compare two identical shields excepting for a big difference in block and you'll see the same protection rating.

17
Are stats outside of your primary worth getting at all?

12
What weapons are class restricted?
8
Are weapons and armor damaged by anything other than death?
7
What benefits are there in giving your followers better [magical] weapons? Should I craft them weapons?
2
What do all the dye colors look like?
4
Comparing a two-hand weapon with two one-hand weapons in the inventory
1
How do I interpret the "stat changes if equipped" information when comparing weapons?
3
Should I bother to look for specific damage affixes when searching the AH?
1
What armor and weapons do Crusaders use?
3
What factors should I consider when comparing 2-Hand to 2x1-hand weapons?