How can I fairly compare a socketed and unsocketed weapon?

Occasionally I'll happen across a new weapon with a socket but "worse" stats than my current, ruby-socketed weapon. How can I compare the two fairly without giving Shen my money? 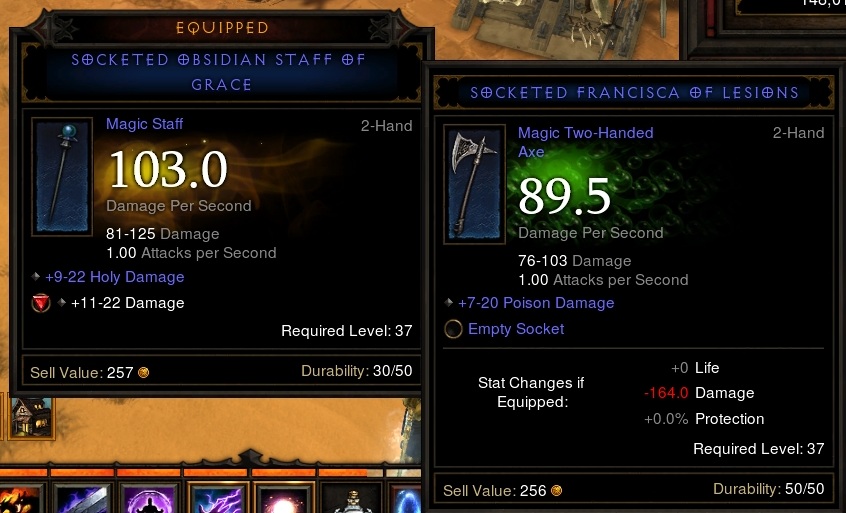 (This example is probably too easy because the attack speeds are equal...)

Rubies add a flat amount of damage to weapons.

So take the average damage of the weapon, add the bonus for whatever Ruby you're looking to compare it to (11 in this example), then multiply by the attacks per second. Voila! Now you can compare the two weapons equally!

The math gets a great deal more calculated if your weapon has your class' primary stat on it. In that case, I'd suggest paying Covetous Shen - gold is easy to earn, after all.

You can either calculate what happens if the same gem is added to the other or if the gem is removed from both. The results will be slightly different if the attack speeds differ as damage gems are more effective on faster weapons.

To remove the gem mathematically, you would instead be multiplying the gem's average damage by the socketed weapon's attack/second, then subtract that number from the weapon.

If you're trying to compare just their attack damage (useful for casters that don't care about DPS as much as weapon "swing" damage), divide the end result on either weapon by the attacks per second on said weapon.

24
What are the precise effects of rubies in weapons (why do the tooltips show a range)?

4
How can I track "Magic Weapon"s cooldown?
5
How can I determine the quality of a socketed gem?
1
Is there a way to quick compare a weapon with the one in your off hand?
5
Can I compare items of both my main hand and off hand to a 2-handed weapon?
3
Can I compare weapons by their large white numbers?
5
How is the weapon damage on this weapon calculated?
1
Which weapons can be socketed with a Gem of Ease for powerleveling?