How can I become the Hero of Caldeum?

I've tried this segment two or three times now, with and without allies. I can't seem to save enough of the peasants to get this achievement.

If I stop long enough to kill off the enemies, they all seem to decide the best place to stand is in the shadow of one of Belial's meteors. If I just run like crazy, the monsters eat them for lunch. If I take my time, I either run out of time or get to the peasants just as they're becoming lunch and/or a bloody smear on the bazaar walls.

What's the trick to saving enough of the peasants to get this achievement?

The "trick" is not having them die and choosing to take more efficient paths to this end so as to also collect enough refugees and not run out of time. This involves protecting them from the constantly spawning enemies and the randomly placed meteors. Having sufficient crowd control through abilities and monions/followers is really the only way to keep the enemies at bay. Movement speed bonuses are useful if you need to run back and help out as well as get to the refugees faster, but the refugees don't go faster because of this. As far as the meteors are concerned, you just have to keep your eye out and back off if you don't think the refugees will make it past an oncoming meteor. As far as time, try to get reasonably-sized groups of refugees together in each trip in order to take fewer trips.

I've completed the requirements for this achievement several times with each class on single player. Witch Doctor is by far the easiest class to earn this achievement with. All of the followers work very well so take whichever you like best, but I prefer Scoundrel's speed and crowd control and Templar's aggro gain and crowd control. Crowd control abilities that stop/slow/distract enemies can be useful here as can abilities that increase movement speed. Any of the class' minion summoning spells are great for distracting the enemies, especially if the minions can be targeted by enemy attacks (monk and witch doctor).

The AI pathing for the refugees is pretty bad and they sometimes wander or run off to the middle of nowhere (or to try and fight the enemies?) and that's often your worst enemy. Learning when/where the enemies spawn is helpful as the worrisome spawns are always the same and triggered by your actions so you can learn where to attack. The meteors are your second biggest worry as they seem completely random.

I'm sure there are better strategies, but the approach that I took to consistently complete this achievement with each of the classes involved 4 trips and was as follows: 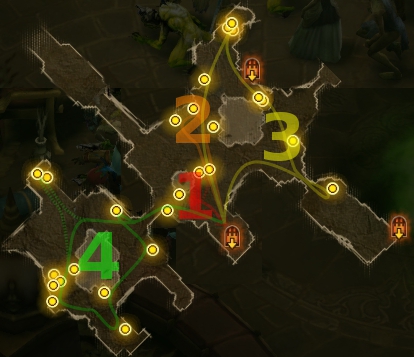 I added the unmarked refugees and drew out the paths in the above image.

There are a total of 26 refugees and you need to rescue 20 of them so you can let at most 6 die or not even grab them if you like. This should take about 2:40 at most of the 3:00 so you should have some leeway on the time. You could probably tag trip 2 on the end of trip 3 and save a trip, but with the enemy spawn frequency and locations as well as the argumentative AI, I found the refugees pathed better and died less when there were fewer of them for trip 3.

For starters, movespeed is vital. im a WW barb so i sprint constantly, also contadictory to an above poster the villiagers WILL pick up the pace to keep up with your increased movespeed. quickly sweep around the first "area", picking up villagers as fast as possible, sprinting/vaulting/whatever movespeed increases u can fathom with ur given class, returning them in groups of none less then say 5-10. it should take you 20-30 secs to clear ALL the villiagers, tadaa easy achieve :)

ps if u find ur villagers standing in stupid places or are surrounded by enemies, dont just stand there or try to kill them unless u can take im in 1-2 shots. if not, run like crazy with whatever movespeed skill u may have, they will follow.

I had problems with this in singleplayer too. If you have someone to coop with try it because it seems that the frequency of meteors is divided by the two players.

If you want to do it on your own try to use your best singletarget ability to snipe the enemies and run snakelines to avoid the meteors. There is no trick for this achievement, maybe you are just terribly unlucky but if you wait for meteors to come down and then sprint through you should be getting enough peasants into safety.

I had no trouble with the meteors when I did it, they seem to fall in fairly specific spots and since there is a marker for when they'll fall you can tell when it is safe to walk or not. Aside from that I mostly just ignored the mobs and ran the peasants to the sewer. The guards would take care of any that followed, if they were really in my way I could usually kill them in 1-2 hits.

5
What's the point in doing scouring of caldeum?

12
How do you get the secret achievements in Valet Hero?
15
How do I get the “You're My Hero!” achievement?
3
What's the easiest way to share a good hero build?
9
How do I become the Puppet Master?
5
At what quests/points in time do each of Deckard Cain's talk options become available?
0
How does the hero knows the identity of Belial?
5
How do I get “The Good Stuff”?
4
Can crafted items become ancient?