How can I find the House of Curios?

... and what other secrets and achievement goodies are located in the zone?

The House of Curios is one of the dungeons for the No Stone Unturned achievement, and also (according to DiabloWiki) the location of a lore book, which is needed for the A Quick Study achievement. The answer to Where are all the random dungeons says that the house is in the Fields of Misery, but I haven't been able to find it.

The House of Curios is a very rare instance that spawns in the Fields of Misery zone. The instance itself is located in a named sub-area called the Lonely Dwelling. Finding it will require getting lucky, or spending a lot of time running and re-running the zone. To find it, head to the Fields of Misery, check each of the six possible spawn points and, if you don't find it, leave the game and then resume. Setting your quest right could allow you to enter the game right in this zone, reducing time spent travelling.

There are six chunks in the zone that will each be filled by random tiles. Two of these are always the Waypoint and the Khazra Den, the latter required to move the quest forward. Hence four of the six chunks will be filled out from the other possible tiles. One of the chunks is smaller than the others, and won't fit a large tile (but could fit the Lonely Dwelling or waypoint).

In the following image, I've outlined the six random spots, and labelled them with what they happened to be for me that game. The chunks will be in the same places, but the content inside is random. 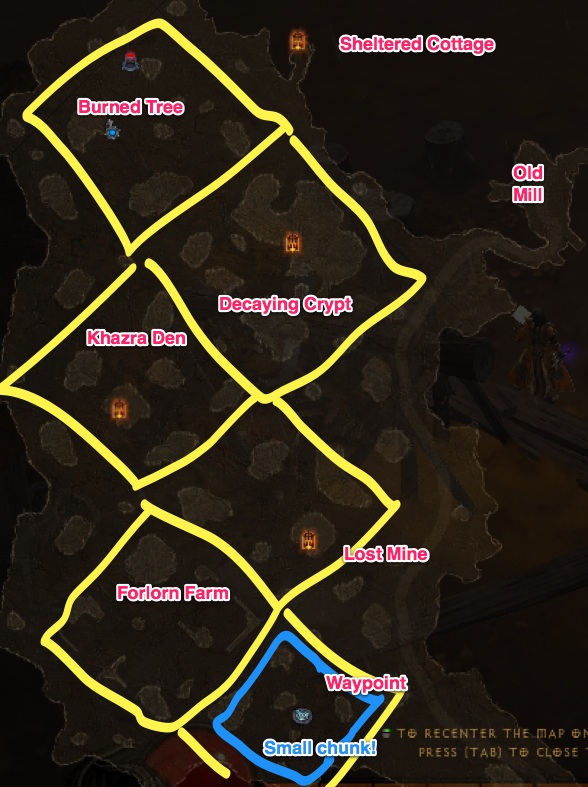 The possible large tiles are:

If a tile doesn't have one of the above, it could instead have:

If a chunk has one of the 'small' bits, the rest of the chunk seems to be filled with other random stuff, such as a burned tree, or an old sawblade. I think the Khazra Den and Waypoint are actually 'small tile' candidates in the game's algorithm. Also, the Burned Tree could be one of the large chunks, but I'm not sure -- I found my House of Curios and haven't researched further. ;) Anyway, point being, there's these six spots, and you should check all six.

Also in this zone, near the top (northernmost) corner of the zone and a bit down and to the right, are a few steps that lead up to a small house. This can be one of three different things: just a decorative house that you can't get into, the Pillaged Home instance, or the Tinker's Hovel which is the location of the Wandering Tinker's Diary.

I have finally figured this out! There are always two big blocks, which can be any of the following:

From what I can gather, all of these have an equal spawning chance. These two big blocks are always located north east and south west.

There is always a variable cottage block which is a small outlet from the far north end of the map. It is always there and never moves.

Then there is one fixed block which is a lumberjack and this is always north east (left of the big block and south of the variable cottage block and small block.

There are always 4 small blocks. Two of them are the Khazra den and the waypoint. One of them is either the lost mine or the scavenger's den (not definite about this but 80% sure). (Special Note: Scavengers Den, Lost Mine AND House of Curios share spawn, you will not get any of the others if you see one. So exit game and reload!) The final one is any of the following:

There is a brilliant diagram of the positions of all the blocks in the link below. The blocks will always spawn in these places. Hope this helps!!! Btw it is the 6th picture I think. Just giving more detail than the prev answers. 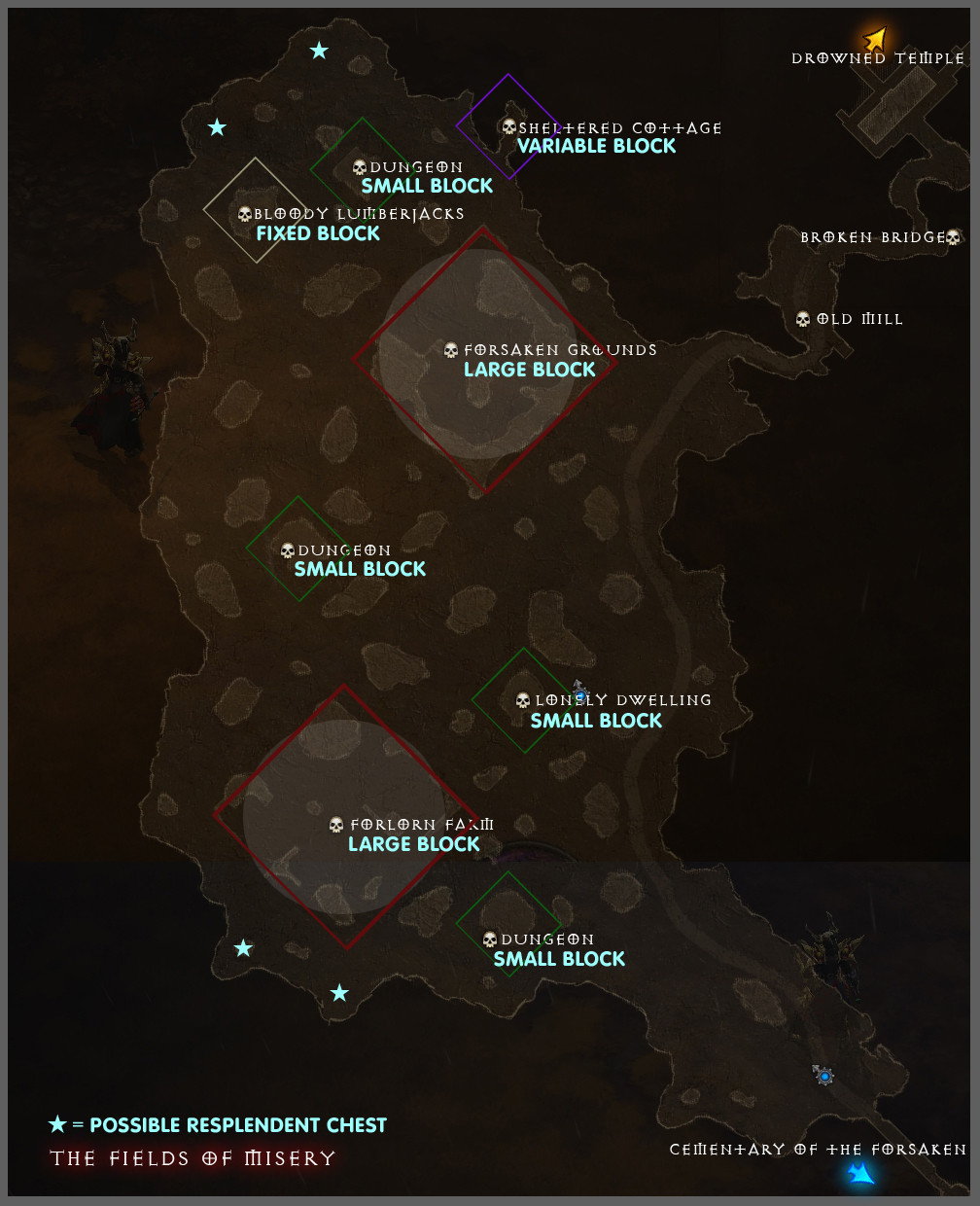 The best way to grind this is to set quest to Act 1, quest 5. Pick up the quest from Cain and go to the Fields of Misery, find the Khazra Den and go inside. You will get the checkpoint marker.

Now leave the game and then now every time you resume game you'll spawn inside the Den so leave and you'll see the Den and waypoint are marked on your map. Use the waypoint to work out where you are and go hunting. And of course now you've got 1 less zone to check!

For those that are looking for the house. The scavanger and lost mine are not guarenteed to be the other small block. I had the puddles surrounded by bushes and then house of curious plus kazra and wp of course. so do not stop if you find one.

114
Where are all the random dungeons?
32
What are the locations of the traveling merchants for the Market Research achievement?
5
How can I more effectively find good deals on the auction house?
22
How can I find the ancient device with less searching?
5
Is the Bloodstained Letter bugged?
6
Diablo 3 Auction House: How do I find only blacksmith recipes I can learn?