How to capture the last point in Junction?

Some areas in TF2 are just horrid to attack. Two come to mind: Egypt, fourth point and Junction, last point. This question is about the latter.

There are five ways to approach the point from and they all suck. Let's take a look at the map from top-bottom: 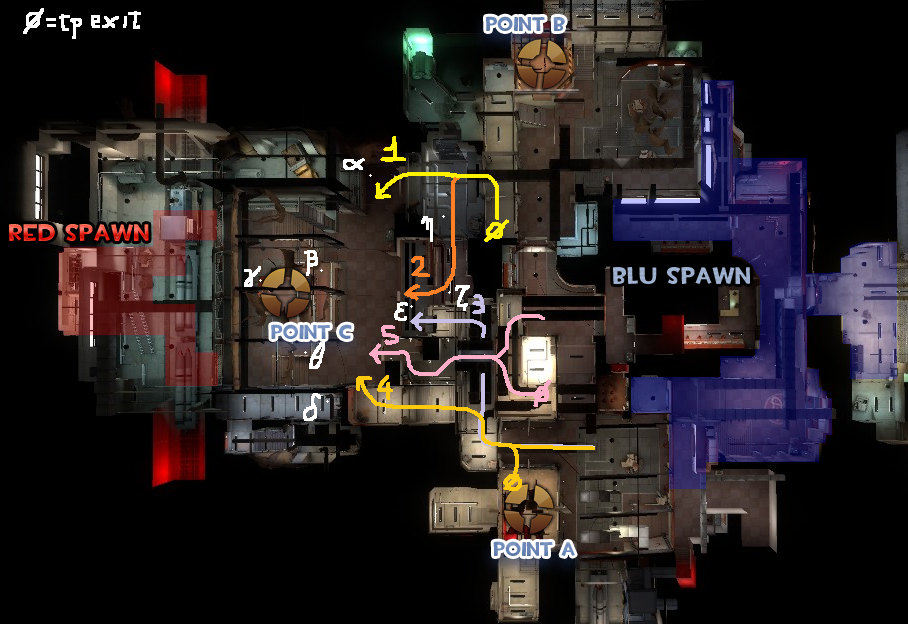 Please forgive my greek. You can:

So, all the options for Blu suck and as a result all games seem to end on a score of 2-2. Or is it just the server I frequent? What is the key to break down Junction?

Ah its been a while since I've played this map

What I generally try to encourage my team to do is:

(All letter and number references are taken from OP, see pic in OP for relevant info)

Split up to attack from both 1 and 4. If people don't want to split up, I recommend 1. The entrance of the push doesnt matter much but I recommend entrance 1 for its close proximity to the stairs up to C. I know that all the entrances suck, but thats where the other players come in. Its good to split up because it makes RED look both ways and they have to hold two fronts.

You need a good spy or two, and good demomen and medics to pop an uber. Spys go in around point γ, not to backstab, but to sap and annoy the other team. The last time I played, this was my job and I had a field day. If you can get backstabs then go ahead, but the main goal is to annoy and distract the enemy. Sap buildings, and keep sapping till an engy takes a swing at you, then retreat to a corner to hide. Then go back once he leaves to heal his other sentries. Eventually the engies become annoyed and try to chase you. All you have to do is let your teammates know when the engie is away from his post, then medic-demoman pops in and blows the sentries away, and at the same time you sap the dispensers in the back. As the engie comes to save his dispensers, get ready to backstab, or the medic-demoman team can swoop in and blow up the engies too! Then everyone rushes in while the buildings are down, heavy damage classes hold the doors while scouts/spys cap the point. Congratz you won!

Also, with one spy at γ it means another spy could go to δ, then if that engie leaves to help the others, sap his buildings in his absence. The spys can take down sentries all by themselves through team work.

Of course its not just up to the spies, while they are distracting all the other classes have jobs to do too!

Its all about letting the uber go at the right time, when the engies are far from their sentries so they can be taken down with a engie constantly repairing them. Then your team makes the big push to cap the point.

A few things about this though:

The enemy could easily realize you have spies annoying the engies, and of course then, out comes the pyros. Make the most of your surroundings by jumping off C to escape them. Or if you can, lure them back to your team's 'base' and have a solider or heavy finish them off. Or of course if you're good enough you could just kill them ;)

Another problem is your team-mates. I know this is called TEAM Fortress 2, but a lot of hatless (and hat-wearing) players seem to forget that at times. So, usually not everyone on your team listens to plans, and you get the occaisonal friendly soldier/heavy rambo, the one who just runs in and dies almost instantly from the RED sentries, maybe getting a kill or two before utter destruction. Maybe no one wants to play medic, or everyone wants to play pyro. Your team will almost never be perfect. But, with a little coaxing, you might be able to get a few people to listen and follow the above plan as best as possible, maybe an Engy, a Medic, a Demo and a Spy, then let the rest of the team do what they will.

Use spys to sap and distract while the team gets ready for a big push, then push all at once. The entrance of the push doesnt matter much but I recommend entrance 1 for its close proximity to the stairs up to C

This is an extremely hard map to win as BLU, but it is possible :)

8
Tactics versus new "updated" engineers
7
What are the typical nest placements of Yukon?
11
With proper aim can an Ambassador always one-shot a sniper?
12
How is my disguised loadout determined if I disguise as a class that's not in play?
18
What is the max amount of achievements I can get by performing any one action?
6
What are the advantages of using the Wrangler?
5
TF2- how to deal with Roof Wranglers
1
How do I make the train go forward and take damage in Snowplow?
2
Are all bot killer weapons strange?