Recommendations on lighting up a big uneven surface

I need some tips on lighting up an area. Basically I am building a mob trap under the ground, and I want to light up the surface so nothing will spawn there.

I have considered building this elsewhere (on an ocean) but I want to try this underground.

Lighting up the caves will be the next chalange. I have already dough trough the last 20 levels and collected large amounts of resources doing so and placing random touches along the way. This week I want to focus on the surface.

So the surface I want to light up is 256 x 256 blocks. I have removed all the trees and filled up all the deep holes. There are still some uneven parts that i want to leave in place if it is possible.

Correct me if I am wrong here, I have just been playing this:

Ok I guess if this was a flat surface I would put a torch every 13th block right?? I place a torch, count 12 blocks, and place one on the next block, and so on. Now some area's are 2-6 blocks higher or lower, do the same rules still apply??? Some area's are a little higher, and just at the end is a mountain of about 15 blocks. How would I light up that.

Secondly, I actually want to use glowstone instead of torches. Do the same rules apply there?

First, take note of some information about light-emitting blocks from the Minecraft wiki:

Now, moving vertically will decrease the amount of light as well, also by one for each block moved. This would mean that if you moved 3 blocks horizontally, then 3 blocks vertically from a torch, the light level will drop by 6 to a value of 8. So, you could just count the number of blocks you have moved both horizontally and vertically from a source to figure out what the light level has dropped to and when you need to place another light source. I believe once you reach a count of N-1 blocks from the light source (where N is the light level of the source) is when you should place another one.

A potentially easier alternative to counting is to use the debug screen (press F3) to track light levels. This will show you a bunch of stats, like so: 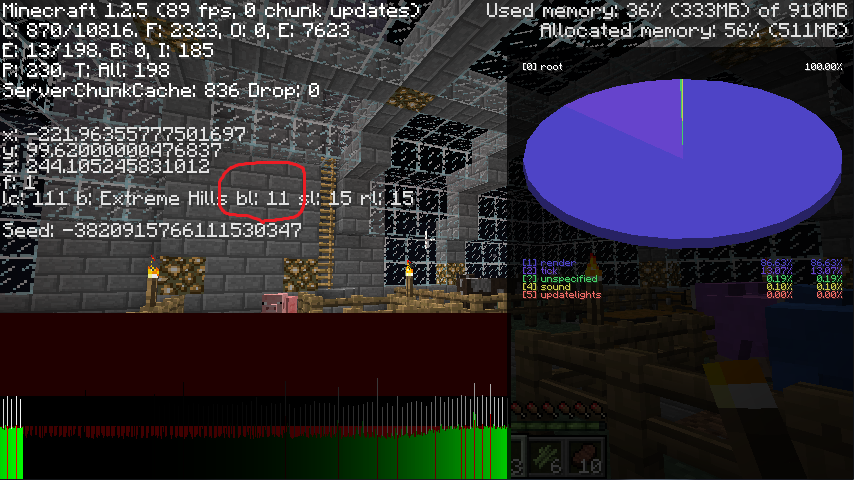 The number to pay attention to is the one I circled labeled "bl", which stands for block light. This is the light level due to sources other than the sun and the moon as measured at your head level. This means that if you place a torch on the ground, then stand in the same spot, you will get bl = 13, since your head is one block above the light source.

Using this may make it easier for you to lay out your light sources and to check where you may have some dark spots. I use it often inside my structures to make sure I have lit them up appropriately.

Light does spread around corners, but does not travel diagonally.

Consider the following sideviews: Key( x = block. * = torch on ground. number = light of the airblock, amounts 10 and up are omitted)

So - from all this we can see that light loses 1 square of reach for each vertical level it must travel. 2 (1+1) sqaures are lost if light must move up and then back down due to a bump. If light must climb 6 levels, it can only reach 6 squares at that level.

I recommend placing torches at the top and bottom of 6 level inclines first, torches on the same level can be 13 squares from each other.

Glowstone block, according to the wiki actually has a luminescence of 15 vs. the Torches 14.

I love using the glowstone blocks over torches because I makes a much cleaner look.

As to elevation for continued lighting..

Transparent blocks do not affect the light spread, unlike solid ones which will stop the light from being transmitted any further. This includes glass, water, ice, portal interiors, and so forth. See Opacity for a full list. Certain blocks will only allow light to pass through diffusely. These are water and ice, which reduce light by an additional 2 levels per block, and leaves, which diffuse sunlight but only reduce light by the normal 1 level per block.

I am not sure exactly how much elevation blocks how much light but I found this image.

At extreme depths, black fog closes in. At the bedrock level, a torch can no longer be seen from 11 squares distance. This effect is inhibited by proximity to open sky (i.e. the degree to which the place where you are standing would be lit by sunlight), whether or not the sun is currently up.

26
How does light spread in Minecraft?

11
How can I move massive buildings in-game in Minecraft?
7
Having a problem with lighting a large area
2
Prevent spider spawning in a Mob trap (Minecraft 1.3)
3
How can I control a tower of redstone lamps?
8
Minecraft: Are light sources additive?
1
How can I determine the light level of a block with commands?
5
Planning and analyzing lighting layout
2
Dynamic Lighting in (vanilla) Minecraft
1
How to light megastructures in Minecraft without torch orglowstone spam?