How can I find the ancient device with less searching?

I have found the ancient device maybe 7 times and seen 5 of the outcomes. To see all 10 for the Wheel of Misfortune achievement and to find all the locations for the Nooks and Crannies achievement, you need to find this thing quite often. I've spent hours of farming Desolate Sands and it barely seems to show up.

How can I speed up my runs so that I'm not wasting time wandering the Desolate Sands?

I've seen it appear at the north and south ends of Desolate Sands. Any information is useful if it saves running around this place. Does it appear on the sides or can I skip searching these?

If I see certain things, does it mean I can stop searching that side of the center gap in the middle of the Desolate Sands? It seems like the large spiral location takes the place of the Ancient Device as I've not seen them on the same side of the gap. I've also never seen it near the 3 Mysterious Jars that summon Pazuzu so it's possible this takes the place of the ancient device as well. I've also seen a location with a booby-trapped chest in the middle of a large circle and an area with a bunch of skull-shaped spawn closets, but I've definitely seen them near the Ancient Device. Anything that once I see it says: Stop searching here and move on would be very helpful.

Is there a rule like "there can only be 1 random dungeon in this area", meaning that if I am trying for one of the device's dungeons and I see Vile Cavern or Shaitan The Broodmother (who's death opens up Cave of Burrowing Horror), I should just re-instance and try again? Any rules that can end a search early would also be very useful.

Is there some sort of temporal component that determines when it will appear? Does it appear more during certain times of day? On/close to the hour? During certain moon phases? Anything that can tell me when I should be searching would also be very helpful. 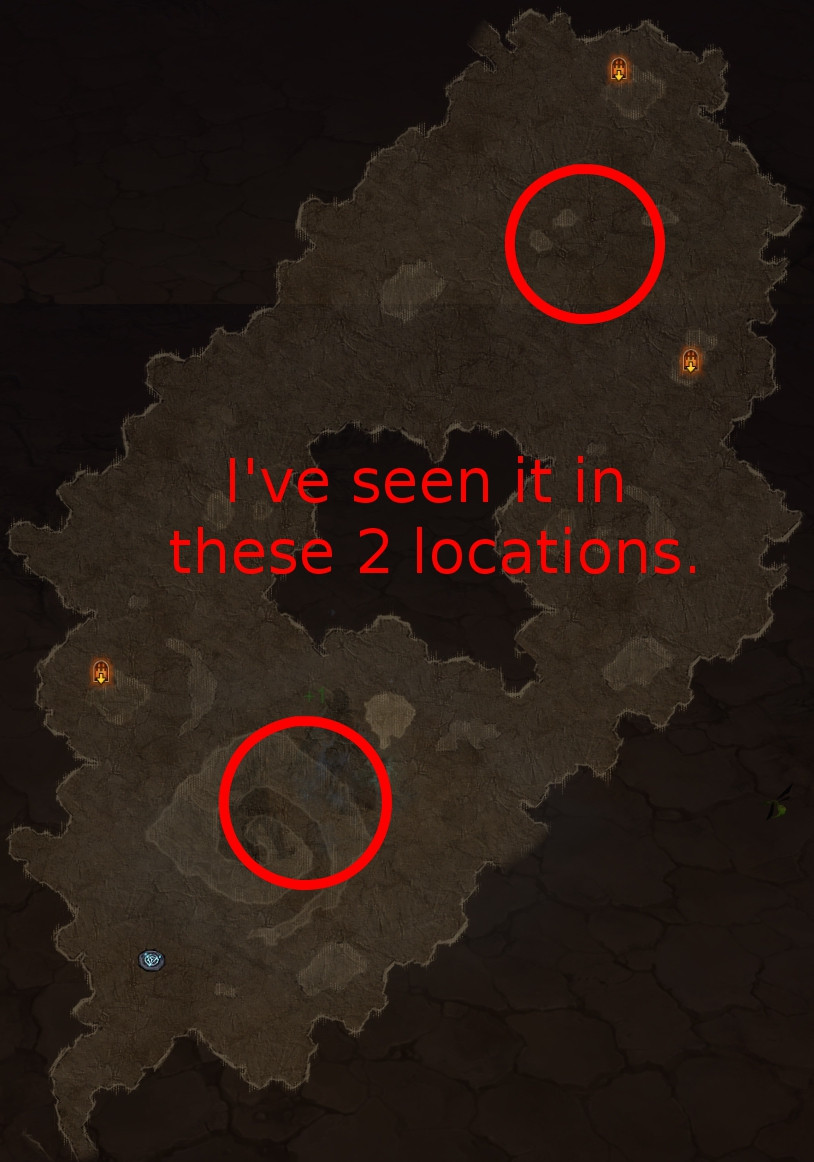 I actually am doing it a different way and I find it much faster. Rather then using the South end checkpoint, I use the one in Zoltun Kulle's Archive to the North west. Walk directly east across the bridge and you run right into where it spawns. When it spawns the first thing you will see is a semicircle pit with bones in it, that's how you know you got the right spot. You see it about 10-20 steps away from the bridge when it spawns, if its not there I reset. I've been running it over and over again both ways (only need 2 more to get the achievement) and coming from the top is much easier to immediately spot it and leave if you don't.

What I ended up doing was:

I didn't see a reason to run to the second spawning location as it would take some time with all the mobs and everything.

But beware that the exploding kamikaze mobs can start at the top of your own spawning point.

114
Where are all the random dungeons?
14
Where is the Ancient Device for "Wheel of Misfortune"?

1
Is it possible to hit Gore Harrier type enemies while they're hovering above?
14
Where is the Ancient Device for "Wheel of Misfortune"?
5
How to use the 'Ancient Device' in the Desolate Sands?
0
How random are the dungeon map variations? Are there predictable differences between difficulties?
1
Best farm route in Act 2
4
How do I get the "Weight of the Beast" achievement?
4
Are there any enemies required for the Death By Disco achievement that can be missed?
1
What determines if an achievement is a rare achievement?
10
Can I make myself have original thoughts?
39
Where can I find vomiting people?