Which legendary items are more useful than a well-itemized Rare at max level/in Inferno?

Legendary items in Diablo 3 max out at level 62. This means that, strictly speaking, a Legendary item in any given slot, will not be the best item available in that slot.

As with all things however, there are exceptions. You see, the thing is, there are a few legendaries, like The Flavor of Time, which offer unique properties. These are either affixes that are not normally available in that item slot, but which are highly desirable, such as +Run Speed, or powerful set bonuses that can offset the reduction in itemization.

Which items are these that I should be keeping an eye out for?

For an example of the sort of information I'm looking for, see this answer about Skyrim.

Helmets: The Helm of Command These will be the BiS for barbs and most likely monks due to the rolls of %life, % block, res All and Dex/Vit/Str.

Mempo of Twilight will be a PvPer helmet due to its high percent of cc reduction, % life, and attack speed.

Andariel's Visage is one of the most widely used helmets in the game at the moment. High attack speed and crit chance + chance for a socket, % life, and high base stat.

Natalya's Mark IAS + high base stat rolls and use of Set bonus.

Flavor of Time like OP stated IAS, movespeed, and CC reduction on a neck. PvP neck for sure.

Off hands: Storm Shield for the % reduced damage.

Ivory Tower is another decent shield that can be used for its damage reduction and its chance at high % life.

Black Bone Arrows for % damage against elites will make farming quicker for DH.

Dead Man's Legacy is another quiver. This differs from black bone in the fact that it can give % increase to some of DH strongest abilities along with a chance for the highest % attack speed on quiver.

Uhkapian Serpent is BiS for WD due to its chance at max off hand damage, % damage against elites and chance on roll to give % damage to certain WD spells.

The Oculus like the WD mojo this can give specific spell % increase as well as being able to roll high Int and top damage on a source.

Belts: String of Ears for the % melee damage reduction.

Boots: Boj Anglers Increased attack speed and movespeed with cc reduction. These will be pvp boots in my eyes and can be fitted to any class.

Bracers: Lacuni Prowlers These are extremely powerful at the moment for an increase in movespeed to hit that 25% everyone wants and IAS which is a straight damage increase. Even better is these can proc magic properties to make them beneficial to all classes.

Weapon: The Three Hundredth Spear, The Gidbinn, and Sunkeeper all %MF weapons for you and your Companions.

Band of Hollow Whispers: Great tanky ring with LoH, resist all, and vitality.

Beckon Sail: Favored armor of DH(3 socket ones can sell for enormous amounts of gold), has no useless base mods.

Note: After 1.0.3, the best way to maximise your dps is to get critical hit chance/damage everywhere you can.

Get critical hit chance on: (the percentage is a good target to have)

Get critical damage on:

My point is that you will have to get gloves, rings and amulet with both high crit chance and high crit damage. And there is almost no legendary that satisfies this criteria.

The lists presented here are very incomplete. I will add some dps items from the top of my head: 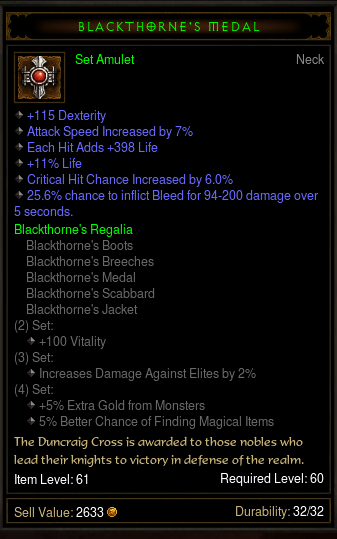 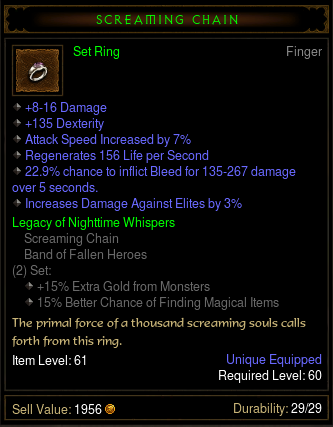 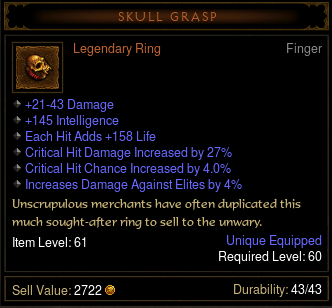 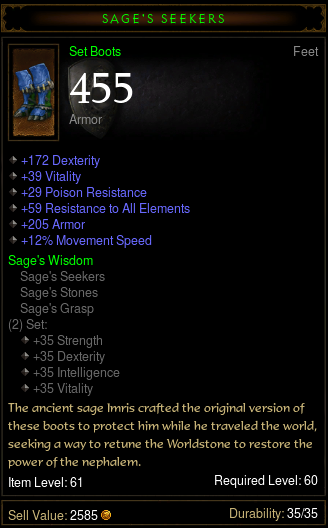 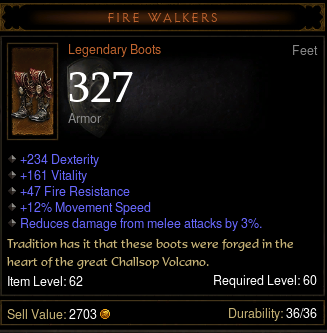 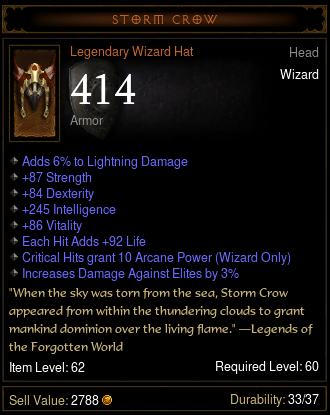 57
Is there a definitive 'Best Weapon' for each weapon type in Skyrim?

3
Are there any reasons to keep low level legendary items?
8
Is farming Zoltun Kulle more lucrative than the Butcher in Inferno?
3
Are level >60 items dropped in inferno Whimsyshire?
2
Can the affixes on an item tell me if it's desirable?
5
Diablo 3 Weapon Damage Range
1
Is there anything particularly good about legendary items in Diablo 3?
10
Where can I find "Ascended" items for level 70 legendary crafting?
8
My crafters are addicted to Death's Breath! How can I help fulfill that need?
2
Smithing low level legendary set items