How do I get to these "unreachable" places in Viaduct?

Playing in the koth_viaduct map, I've often found Engineers building their nests in apparently unreachable spots, like these roofs: 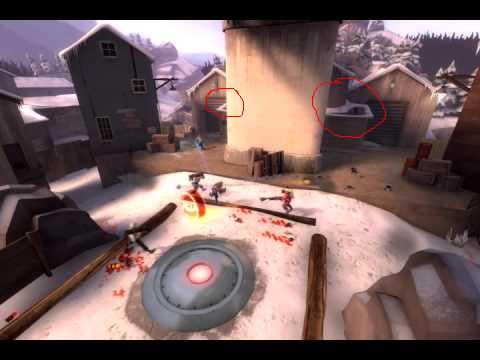 or this catwalk here: 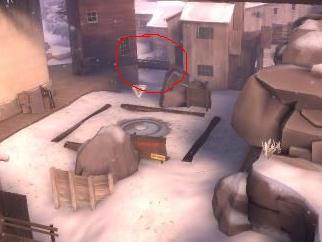 How do they get there?

I haven't tried it myself, mind -- but I've seen more than one engineer start building a dispenser, hopping on top of it while it's still propping itself up, then using the extra boost to deposit a teleporter exit on a ledge they couldn't otherwise get to. Maybe that's what's happening?

Engineers can climb to great heights by using the Wrangler. You sit on top of your turret, jump, and have the turret fire at your feet, propelling you to previously unreachable heights. This is how Engineer nests get set up on the small walkway across from the roof that sits over the second checkpoint, on Badwater (Payload). The Engineer will take damage from this, so caution is required to avoid killing yourself.

I've done this plenty of times, at least at one of the circles you indicated. In the first pic, on the left side, I just jump up on the barrels There are barrels situated beside the little roof indent, jump on to those.

Then, across on the opposite wall are some crates, jump across to those.

Finally get your TP exit ready, and jump back at the little roof, and place the TP when you can.

I have not done it on the other side (right of first pic) but I assume it would be something similar.

Other than that, the other way I get to different places would be to build my dispenser and jump on it. Now normally you slide off the dispenser, but if you crouch just before you land on it, you stand on top of it. This can push you up to new places such as those you circled on this map, as well as many others on other maps. (My favourite place to do this is in turbine)

4
What different kinds of rocket jumping techniques are there?

48
What is a good strategy to deal with lots of engineers turtling on the other team?
7
What are the typical nest placements of Yukon?
9
Where do gifts spawn in Eyeaduct?
9
2fort: Sentry at the intel, or at the spawn?
21
Bonus points (specifically) and how to get them
4
How can I get full color using a decal tool on "Decal-able" items?
12
How do I disable time limit in TF2?
6
How do I tell if I'm playing on a Valve server?
9
Why did someone in my server find a ton of drops?
6
What is the difference between "public" games and "competitive" games? How are these "competitive" games located?