Why do some legendaries have stats beyond their definitions?

First, take a look at the official DB entry for Andariel's Visage. Note that only one random magic property should appear on the item, in addition to one of strength, dexterity and intelligence between 112 and 129.

Well I just found an Andariel's Visage which has 171 strength — well beyond the maximum according to the official D3 database. It also has the random stat of 26 vitality, so it can't be an overlapping strength affix (is that even possible?). 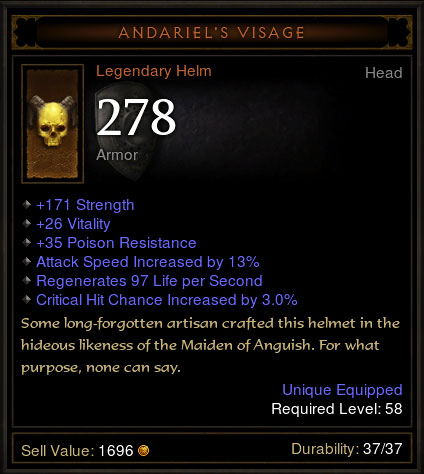 What's going on? I suppose the database definition could be incorrect, but I swear I've seen this happen before.

It is a magic property that gave you +42 strength and +26 vitality.

As Alok wrote in the comment it is most probably the Dauntless affix.

1
How does stats roll works on item in diablo 3

0
Is a monster's stats static, or is it based on some random value?
21
Which bosses have an enrage timer and what are their effects?
2
Why does my wizard perform way less than its stats
2
Do monsters have defensive stats in Diablo III?
16
Do you have to skip some monsters in Inferno?
9
Why was I refunded some gold?
30
Why are some stats on items marked with orange diamond and primary/secondary titles?
3
Does gathering many legendaries before identifying have any advantages?
7
Why not devote paragon points to main stats?