Why doesn't Bioshock 2 start from within steam?

My question is similar to but a little different from this one: Bioshock on Steam Hangs on Startup

I couldn't find anything in the steam / bioshock forums or troubleshooting manuals about this... Neither could I find any log files that Bioshock 2 generates.

I recently got Bioshock 2 via Steam. When starting it from within Steam, the only thing I see is the launcher and the game binary appearing and (about 30s later) disappearing again in Process Explorer.

The strange thing is, that I can start Bioshock 2 from Windows 7's Start menu.

I tried around with admin priviliges, to no avail.

Using Steam's function to Verify the integrity of the game files was a mistake. It apparently restored the files that were updated when installing the patch that was forced on me by the Games For Windows Live framework that Bioshock 2 appears to be glued to. I'm currently trying to recover from this by removing and completely re-downloading the game from steam.

Apparently, the Steam Community feature conflicts with Microsoft's Games For Windows Live in-game overlay.
I disabled it and it worked. 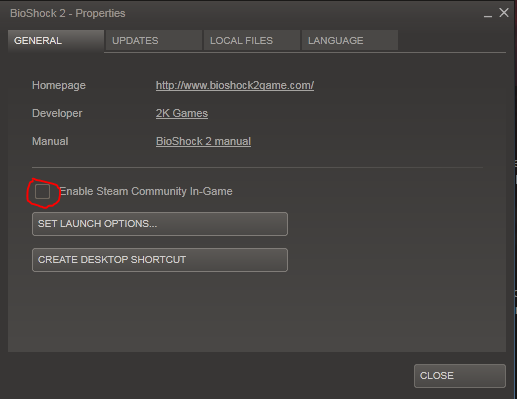 Not the answer you're looking for? Browse other questions tagged steam windows-7 technical-issues bioshock-2 or ask your own question.

10
Bioshock on Steam Hangs on Startup
30
How can I disable Steam from starting up with Windows without logging in to Steam?
3
Adding Minecraft to Steam with 64bit JRE
3
Why my Borderlands is not integrating correctly with Steam?
2
File Validation stuck at 100%
10
Can I transfer Steam Games from Win7 to Linux?
3
Steam game audio doesn't change to Traditional Chinese
6
Do non-cloud Steam save files have a regular structure?