What does the AP Mid GP10 meta entail?

I've heard a lot of talk from high level players about AP Mids starting to build a GP10 setup and having a lot of success with it. TSM Mid player Reginald has even expressed how much he hates the "new mid GP10 meta" because of how passive it is. I've looked around several of the common League of Legends theorycraft sites and not really found a definitive answer to what all this new meta entails, and why it is viable.

So my question is, what are the common builds, runes, strategies, and champions for this "new mid meta?" And when, why, and how exactly it is viable? Strengths and Weaknesses would be a big help too.

I've found a cost analysis of the core build vs the others, and a little what to expect.

The point is that buying up some gold per 10 items is a highly situational tactic. The most important element to determine when considering these items is your personal ability to farm. In the case of being an incredibly powerful farmer (pro players) or being an incredibly bad farmer (new players, low ELO players) these items either help you snowball more or counteract your poor farming skills. If you’re decent at last hitting (say, 50%) then you’ll hit an odd middle-ground where they are still okay items, but you may be better off getting one only one Doran’s and saving up for those more impactful items. Beware this valley and the triple gold per 10 build may just become your best friend in the middle lane.

And this one also gives a nice cost analysis, but also tells you abit about which champions and what to expect : http://www.solomid.net/guides.php?g=27381

After doing a lot of research I believe I've got a much better grasp on all that the mid GP10 meta entails. I'll break down each specific part in the order I mentioned them in my question, starting with build options and ending with strengths and weaknesses.

There are 3 main core item builds for AP carries:

The GP10 item build will generally look like this:

As you can see the GP10 build focuses on getting the GP10 items first, and then working on the build's core. This allows you to get the most out of the GP10 items as early as possible.

There seems to only be two rune builds for this, both of which are very similar.

Seals and Quints are sacrificed for GP10, and Blues are interchangeable between AP/Lvl and Magic Resistance (depending on lane situation). 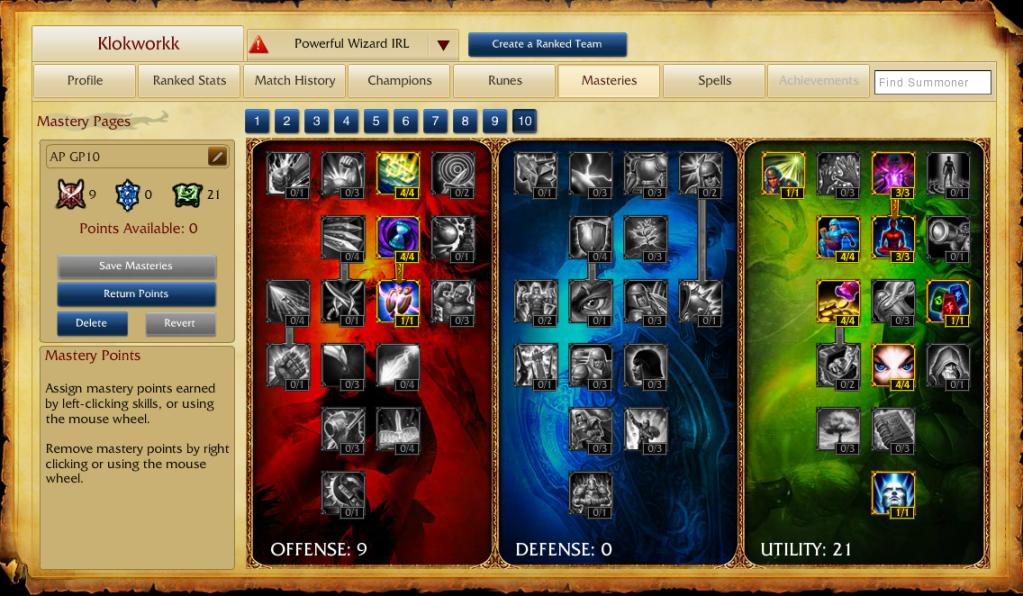 There are two basic strategies, and it largely depends on your champion and playstyle.

The first strategy is a simple farm into snowball strategy. Basically just staying in lane farming like a monster until you become too strong for the enemies to really deal with. This would require a champ that excels at clearing waves, has high damage potential, and scales into late game. The reason that this works is simply because you will gain a larger amount of gold than the enemy mid champion, as long as you can keep your farm up (I'll post a Max CS per minute chart at the end of this paragraph). Suggested champions for this strategy are: Anivia, Brand, Ezreal, Galio, Heimerdinger, Karthus, Kog'maw, Lux, Mordekaiser, Nidalee, Vladimir, and Ziggs.

The second strategy is a roaming strategy. Using the overabundance of gold to allow yourself to roam and gank more freely. Suggested champions for this strategy are: Cassipeia, Fizz, Kassadin, LeBlanc, and Veigar. It shouldn't be a huge surprised that assassins and easy gankers excel in this area.

Additionally, there are a good deal of champions that can do either strategy depending on playstyle, preference, and situation. These champions are: Ahri, Annie, Gragas, Malzahar, Morgana, Orianna, Ryze, Sion, Swain, Twisted Fate, Xerath, Zilean.

WHEN, WHY, AND HOW

This was largely covered in Lyrion's answer, but I'll reiterate here and add a few links.

WHEN: You should opt for the GP10 build if:

WHY & HOW: The following posts are all really good numerical breakdowns of why and how the AP Mid GP10 build works:

Here is the meat of this whole thing really.

My understanding is that there are no great seals (yellow runes) for AP mids. Because of this, Avarice seals are used to increase gold generation throughout the game. Kage's lucky pick may also be used, but only if you intend to upgrade it to a Deathfire Grasp.

The advantage here is more gold, the disadvantage is losing other seal benefits. Mana regen seals probably provide the most benefit to an AP mid, but are almost useless if you're regularly receiving blue buff.

I usually don't go for GP5/10 for mid champion. The only exception is if I really need the item build from it. For example, I like to get DeathFire Grasp when playing LeBlanc. In that case, I get it ASAP since the time to make GP5/10 item is approx 26 mins. Then I build the other items.

As per a GP5/10 build, like a support with runes and all, I wouldn't do it. Because runes will give you better AP or MP (Quints) and other bonus for seals. Avarice won't help you do an AP carry job. Unlike support class which don't farm and don't need strong AP/MP. Of course, having farms + GP5/10 could be good thing, but due to the nature of the GP5/10 items, at the exception of Kage's pick, this is gonna burden your early/mid game. The opposite AP will eventually get stronger than you, impairing your ability to farm or worst killing you. Then the benefits will not show up. AP carry need farms, no matter what.

Maybe you can do this with champion that can easily outfarm someone without needing too much AP. Then the bonus gold will get you stronger than him late game.

To be simple would say :

0
How does the US meta compare to the meta of other regions (EU/APAC)?
1
What counters AP Kog'maw in mid?
8
Why does Talon counter mid champions?
14
How to pick the best support for your ADC?
1
What influences a change of Meta?