Why do Rock Band Drumsets need to be recalibrated so often?

I used to play Rock Band 2 on my friend's PS3, but every so often it would feel completely off and need to be recalibrated. The new calibration settings always ended up as one of two or three settings:

I could recalibrate multiple times, and always end up with exactly the same calibration settings (+/- 1 or 2 ms). However, next time the TV was turned off and the PS3 reset, it would sometimes feel completely off again, and recalibrating again would give one of the other settings. Recalibrating immediately a second or third time gave the same settings, however, so it's not just that I have terrible timing - the necessary calibration settings were changing, for the exact same setup.

I thought it might have been due to his freakish Panasonic TV, but now I have Rock Band of my own with a completely different setup, and it's doing exactly the same thing; so it must be something inherent in the technology. Why does it do this, and is there any way to fix/prevent it?

His setup / My Setup: 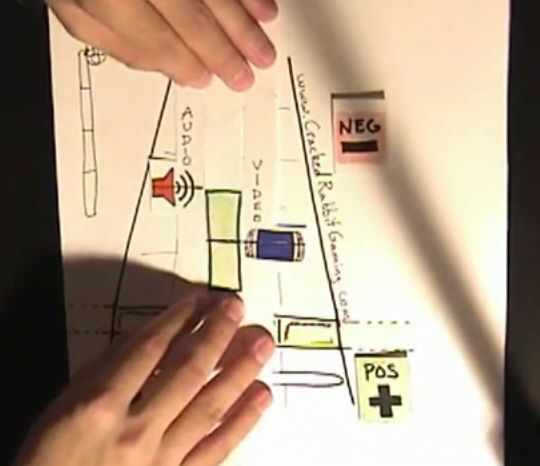 I can't express enough how useful this video is. Even if you think you know everything there is to know about this topic, it's worth a watch.

How to calibrate, per this video:

Warning: different types of instruments may have different lag -- wireless/wired, guitar vs drums vs keyboard, etc. There's only one global audio/video lag setting, no way to set it per instrument. Thus, you should think of the hitbox as the "all controller" compensation area you use to deal with this.

OK, so you are saying that you can sit at your drums, calibrate and get value x, then reboot your PS and power cycle your TV, then when you calibrate again you get value y. And x and y are different enough to cause problems playing. Is that right?

Just so we're on the same page: The game engine will produce an event (say, a snare hit). This event will cause the video to appear in a certain way (a dot in the snare lane crossing the line) and the music to sound a certain way (a snare sound). This event takes place at a single instant in time.

So the only variables that come to mind in this situation are:

I have never heard of any of the 6 or so people I know having calibration issues like you describe with this kind of system. It is possible that you have played on two setups that are particularly ill-suited to time-sensitive application such as Rock Band. It is also possible that you yourself are particularly sensitive to small drifts that other people would not notice. I personally do not think that a 16ms difference would be perceived by me while playing a game like this.

One thing you could do is power-cycle your TV during the calibration process. When the display comes back on, you may be able to notice that the new video is off from the old video (assuming you keep good time :). This would tell you that your TV's latency is variable between boots. You could do the same thing for your stereo. I can't think of anything you could do to your PS3 to test if there is a problem with the game itself, but as I mentioned above, I think this is the least likely to be the actual problem. If you have an iPhone, there are free metronome apps that may be able to help you identify the problem. I would guess there are also free metronome apps for Android.

In the end, I doubt there is much you can do aside from figuring out what the variable is and replacing that equipment. Some stereos allow you to tune the latency, but since your problem is variability over time, this would just be another way to "calibrate" your drums. Or you can live with frequent recalibrations and/or adjust your playing style to accommodate the variation.

Are you saying that you would bring your drums to your friends house? Or that (s?)he would bring his PS3 to your house? Calibration does not happen in the instrument, AFAIK. It merely changes the way the sound and video are "synced" prior to output from the console so as to match your perception and your environment. So if you calibrate the system for one environment/console/display setup in one place, you would have to recalibrate for another environment/console/display in another place.

If the above is not the case, and the drums do not move between sessions and no settings get changed, it may just be perceptual on your part. How long is the duration between sessions? Do you play with different individuals?

In my experience, after a long duration between sessions, it does take some time to get back into the groove of the audio/video sync. It will never be perfect.

As well, different co-players play differently based on their own reaction timing and physiological quirks, and it is human nature for us to sync to these other humans in the room. I've played with one person who was consistently late (but within the range of "correct" in the game) and it can be very disconcerting, especially if you are playing at different levels.

I don't know the science, but I would be very surprised if ~40ms would be significant. I feel like there are times when I am up to 100ms off from the video, but in sync with my co-players and/or the sound, and that I can mentally shift the video to compensate.

I have had good luck with using the video as just a rough guide, and relying mainly on keeping up with the music as well as the others that I am playing with. I have seen people approach these games as precise video challenges and not give enough weight to the music/co-players, and they never do very well.

Or are you saying that a calibration you made simply does not survive the occasional console reset? That sounds like a plain old bug... Are you shutting down the console "properly"? Or just killing the power to it? I have Rock Band Beatles and Guitar Hero World Tour for the PS3, and one calibration per game is all I've ever needed.

Are you always playing with the receiver in the same mode/setup?

The amount of sound processing that the receiver needs to do for some special effects should have an effect on lag.

I would make sure that you are playing with the least amount of receiver processing possible and consistently using that mode.