What is the political status of each of the Tamriel provinces?

Who owns each province of Tamriel as of 4E 201 (when TES V: Skyrim takes place)?

Yes, Skyrim belongs to the Nords, Hammerfell belongs to the Redguards, Black Marsh to Argonians and all of that. But it's not really this way that it works, since Nords, for example, needed to declare war in their own land to seek what they desire.

Which province of Tamriel belongs to the Empire and which belongs to other factions? All of them.

My source is from Elder Scrolls Wikia and UESP. 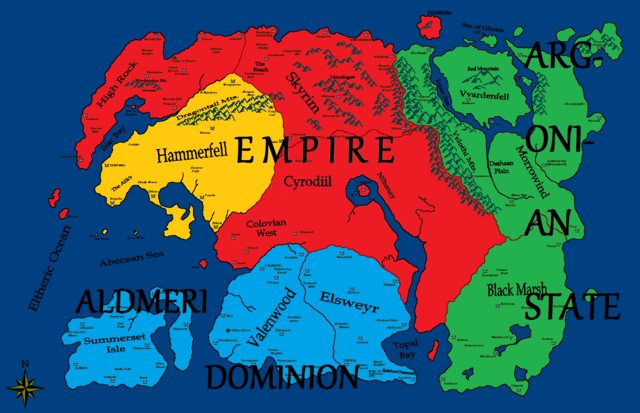 Though, because of the White-gold concordat, the Aldmeri Dominion has HEAVY influence on the Empire, meaning they have a 5~6 province influence on Tamriel

A curiosity, is that, while in Skyrim, the Thalmor are considered "bad guys," in Elsweyr, they are considered heroes by the Khajiit For restoring the two moons of Nirn, and I haven't checked what Bosmers think of them.

To correct the implications of the map included with @Ramirez' answer, I'm adding these maps that show the state of Morrowind based on available information during the events of Skyrim (Fourth Era).

Note that during the events of the Red Year (4E 5), the Argonians conquered southern Morrowind, but contrary to the map included by Ramirez, northern Morrowind still remains under the control of the remaining Great Houses of the Dunmer. The former Morrowind capital, Mournhold, has been sacked by the Argonians, and Blacklight (under House Redoran) became the new and current capital of Morrowind. 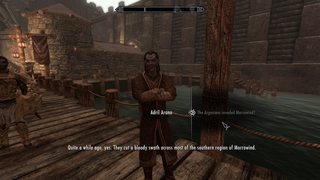 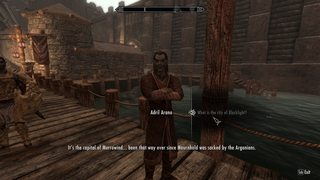 (click images below to view the higher-resolution, original image) 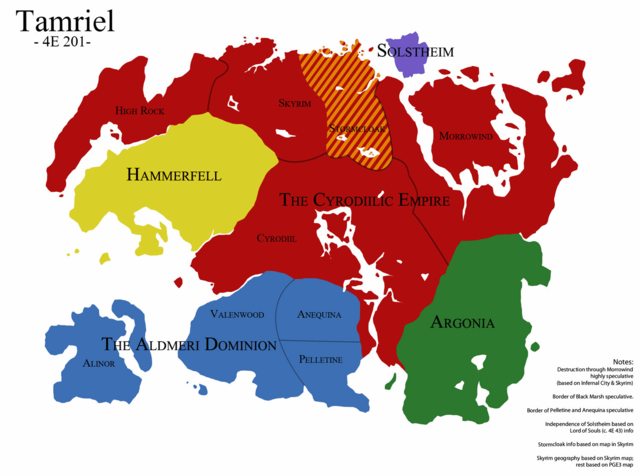 Source: "4th era geographical and political provinces" Dark Creations forums post by user, Lady Nerevar | darkcreations.org
Note included with the map: "Pretend that Solstheim is red, need to get around to changing that."
Also posted at the Imperial Library, "4th Era Tamriel - by Lady Nerevar" | imperial-library.info 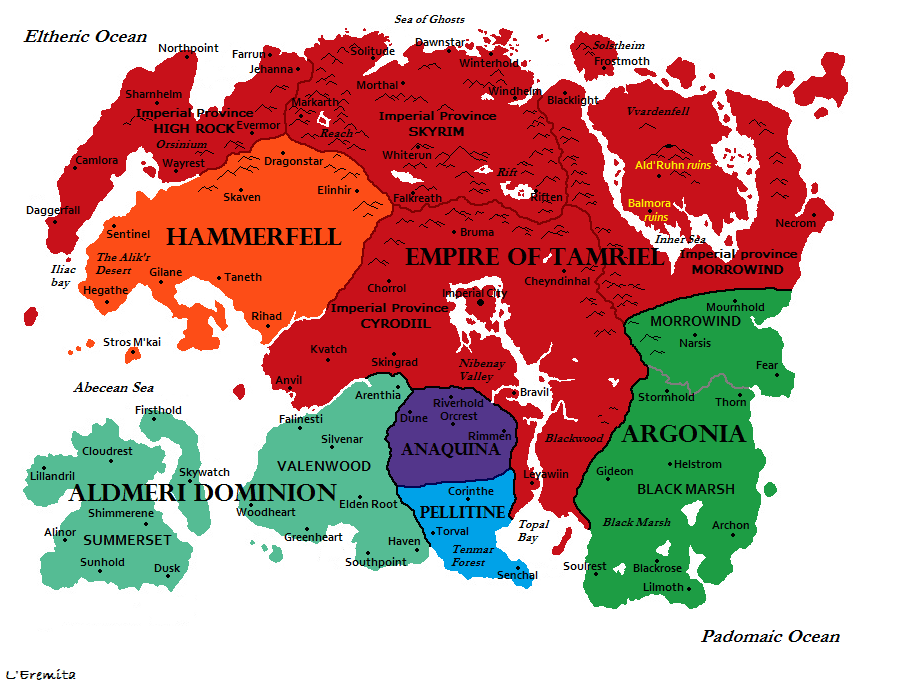 Source: "TAMRIEL, political map, 4E 200" Bethesda forums post by user, L'eremita
Note included with the map: "After having seen many inaccurate maps I decided to read all the details found in Skyrim (and lore) and draw an accurately political map of Tamriel during the fourth era, 200. This map is "lore approved" as far as possible with all the information found. Enjoy, for all the lore fans."
"If someone liked it, I give the permission for use it on other sites, forums, wiki, other media and others encyclopedias of The Elder Scrolls universe."

Info about the other territories:

...in 4E 29, the Aldmeri Dominion was re-established across the Imperial provinces of Valenwood and the Summerset Isles, which were renamed Alinor. Once the Void Nights (4E 98-100) ended, the Thalmor (who govern the Aldmeri Dominion) claimed to have caused the return of Masser and Secunda. The Thalmor also developed a friendly relationship with the former Imperial province of Elsweyr in the form of two client states, Anequina and Pelletine. Later, in 4E 171, the Thalmor invaded Hammerfell and Cyrodiil after Titus Mede II rejected their Ultimatum. Aldmeri forces would push deep into both provinces, taking many cities, including the Imperial City. The Thalmor then faced their greatest defeat (later known as the Battle of the Red Ring), in which they lost all of their forces in Cyrodiil. Despite this, due mainly to the exhaustion of the Imperial Legions, the Great War ended with the White-Gold Concordat, which resulted in Talos worship being outlawed in the Empire and a significant portion of southern Hammerfell becoming part of the Dominion. However, Hammerfell rejected the treaty and left the Empire, continuing to fight the Thalmor until 4E 180, when the Second Treaty of Stros M'Kai was signed by both sides, resulting in the Aldmeri forces pulling out of Hammerfell and a territorial status quo.

actually, all the provenience are owned by the imperial army. (in the 3rd era) after the oblivion crises, Aldmeri Dominion became a very strong force and took over the Summerset Isles, Elsweyr, Valenwood and the southern half of Hammerfell before the imperial army had a chance to gather their forces to take back what they lost. but instead they signed a treaty with the Aldmeri Dominion. so to this day in Skyrim, this is how they stand.

Not the answer you're looking for? Browse other questions tagged the-elder-scrolls-series or ask your own question.

11
What happened in the 200 years between Oblivion and Skyrim?
12
What exactly happened to get the Mages Guild Disbanded?
6
What actually happens in “Azura and the Box”?
3
Elder Scrolls: What happened to the dragon statue left when Martin Septim's Dragon petrified?
1
What traits do the Dwemer have in Elder Scrolls' lore?