How does the distribution of ores & chests change with world size?

When I compare a small world to a large world in Terraria, it feels like I find ores and chests more frequently in the small world.

Are resources actually closer together in a small world? If so, what are the relative distributions for each world size?

In small worlds, resources are closer together.

According to the Terraria wiki page on World Size,

This can be seen by using MoreTerra to display the whole map. Taking same-scale slices of each world size reveals the sparser dispersions of rare resources in the larger maps.

For a numerical argument, you could count the number of rare resources on n small worlds, n medium worlds and n large worlds. Then divide each count by the respective world dimenions and average the numbers. This method will give the average density of resources on each map size. The greater n is, the more accurately average resource density is estimated.

For example, below are three same-scale slices of each world size. Note, this is only one sample, so the total counts do not accurately represent the average resource density of each map size. 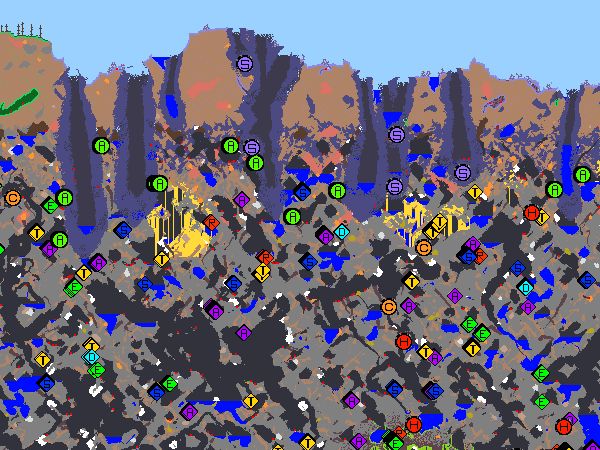 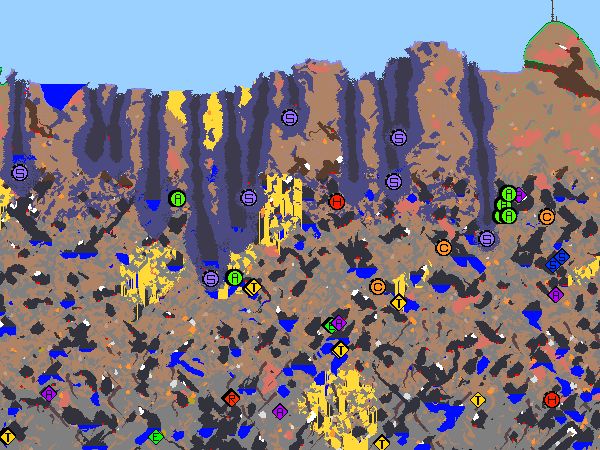 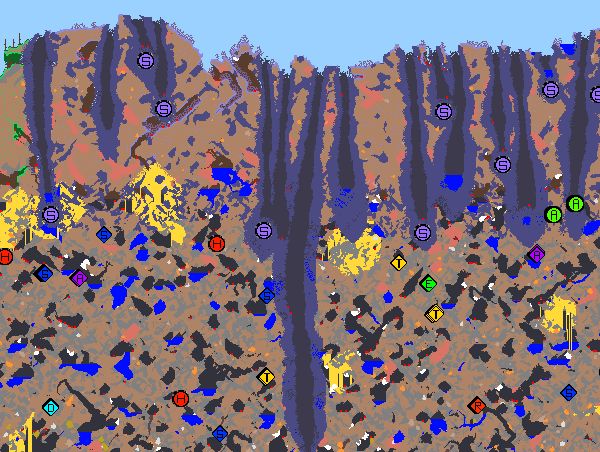 Another way to find the exact dispersion ratio is to look at the code.

In response to people asking about an open source version of Terraria, Redigit says,

This will probably happen eventually, but the decision to not obfuscate Terraria was made for a reason

So until the open source code is released, somebody could dig through the decompiled code and find the variables that control the base resource density of each map size.

The larger the world the more likely you are to find golden chests, floating islands, and more loot in the dungeon. Although there is more loot the progress becomes a lot slower in larger worlds than in smaller worlds because of the fact that there is more to explore. If you are a complete beginner at Terraria than i suggest you choose small world, but if you already know what you want to do than choose large at your own expense. If you want to get ores easier than small. If you want to get a lot of ores than large. Medium isn't really a type that is chosen that much because It's sort of in between, I don't like it because it just messes with my head(the dimensions). If you are looking for more(quantity) chances of finding rare golden chests/locked shadow chests than choose large. In the shadow world they spawn with a huge number. In some cases yes, resources can be a lot closer in a smaller world but more rare.

Above is an overview of a small world, as you can see, small dungeon, 3 floating islands, 2 small corruptions, a jungle, small deserts.

Above, a Large world, the image is a very small so i will post a link where i found the image, if you can see the picture, there are 5-6 floating islands, 3 different corruption areas, a jungle, a bigger dungeon and A LOT more space to explore. You can also easily tell that the large world is deeper and higher so you can easily make harpy farms and explore more caves before reaching the underworld.

17
What are the different worlds' size in Terraria?
30
How do I progress past the initial tier of gear/crafting in Terraria?
5
What are the different world features determined on world generation?
6
When do hardmode ores spawn?
8
How many bee hives are there per world?
2
What is the smallest body of water I can fish from?
0
Is the ceiling in hell supposed to be that low?
4
How to find the last bit of corruption/crimson/hallow in a terraria world
3
How do I find more orichalcum ore in Terraria?
3
Where on the body are coordinates taken from?