Is it possible to store stone in a more efficient manner?

As you can see it is getting a bit out of hand and taking up a lot of space using raw Stockpiles. 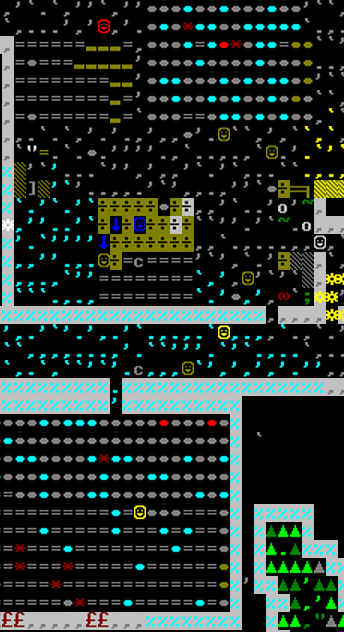 Any item that is marked as garbage/to be dumped is hauled by a hauler to a garbage zone, and then marked as forbidden.

You can designate a mass area as stuff to be dumped, use d, go to item properties b and select d any squares you now designate containing items, will mark those items to be dumped. (Use the same commands but D to mass undump items, or c to claim/unforbid).

This trick is called a quantum stockpile. Some consider it to be an exploit.

From the wiki there are also these two tricks:

A similar effect may be achieved by building a wall two tiles in front of a catapult and digging a channel between the wall and catapult. By firing the catapult at the wall, the stone falls into the trench. The stone will pile up in the channel, putting it out of sight and out of mind. Not only does this train siege operators, but it clears the stone that your legendary miners leave.

Another way to quantum stockpile is to not have appropriate stockpiles to move items back you moved to the trading depot. The depot can hold an infinite number of items, and those items will not be removed if there is nowhere else to place them. This is also useful for anything you want to trade anyway.

Another way, if you're mostly planning to use this stone for constructions, is to order it carved into blocks at a mason's workshop. Each boulder creates four blocks, each of which can be used in place of a raw stone when building things (so you get 4x as many things out of it as well). This is also a good way to train up beginning masons, since their skill affects only the speed of the job (and it's a pretty fast job anyway). I usually build a special mason's shop for this near the quarry, with its work queue filled by "make blocks" orders on repeat so that my manager doesn't give it orders for anything important, and I set it to "beginners only" so that my master masons don't waste their time.

Blocks can be stacked to 10 in bins in a stockpile, cutting down the space you need by 60% (assuming you have plenty of bins). In addition, buildings and constructions made from blocks are somewhat more valuable than those made from raw stone, and are built faster.

The disadvantage is that blocks cannot be used for anything other than constructions and buildings: furniture and crafts require raw stones. So be careful not to block up all your stones if your economy relies on stonecrafting. Smelting pig iron and steel also requires raw flux stones, but in this case they should be safe from being grabbed up by an overzealous mason because economic stones are normally ineligible (I recommend manually setting kaolinite to economic as well if you want a porcelain industry).

You can quantum stockpile without the need to manually designate dumping and reclaiming, and you can do it in such a way that allows you to have multiple quantum stockpiles with specific contents. Having multiple garbage dumps will result in dwarves using the closest for everything. Cart-powered quantum stockpiling lets you retain all the benefits of the custom stockpile settings.

One benefit for this method is that dwarves can use wheelbarrows to haul stone or other heavy objects to the feeder stockpile. They only have to carry the objects between the feeder and the track stop.

By setting up a hauling route with this stop, dwarves can be told to fill the cart from the feeder stockpile and then give the cart a push, which dumps the contents onto the quantum stockpile. You can have a stop for each different kind of quantum stockpile you like! It works great for stones, furniture, etc - pretty much anything that isn't stored in a container.

8
Do resources for construction get assigned immediately?

12
Is it possible to dig through a damp stone?
10
How can I stop nauseous animals from vomiting everywhere?
4
Why should I resize my embark site?
13
How can I prevent my civilian dwarves from drinking/eating from the military stockpiles?
8
Most efficient way to move Goblinite down many z-levels?
10
What is the fastest/cheapest/most efficient way of killing immigrants?
5
Where are the flies coming from?
1
How to properly dispose of refuse
2
Megabeast totem crafting and displaying specifics?
1
Why won't my stockpiles show up?