How close should cities be built in Civ 5?

In Civ 4, it was easy to figure out how close to build cities to maximize my territory, because the number of tiles they could use were very limited. In Civ 5, cities can use many more tiles (more than they'll need until they're huge), so I'm wondering how close I should build my cities. Is building the maximum number of cities even a good strategy in Civ 5 (as it was in previous Civs), or should I build a few giant ones far apart?

Probably related to this question:

Is there a limit to the number of tiles a city can use in Civ 5?

It isn't as simple anymore. There's a number of things to think about

So while the technical answer is that you maximize your potential territory without gaps or overlap by leaving 6 hexes between cities (since the maximum radius for a city is 3 hexes), I think you will find that blindly following that will be a sub-optimal strategy.

This is one of the systems in Civ 5 that is not necessarily more complicated, but certainly seems to be more strategic than it was in earlier civs.

This is the Furthest Apart you would ever want your cities, if your goal is to work every hex. 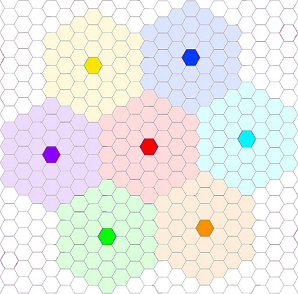 There are any number of things that mean you would like them to be closer together:

But you want to use all those hexes don't you? How do you balance?

Build wherever your city will grow the fastest.

The location with the best immediate access to food and reasonable production will be able to produce more money/culture to buy tiles, and you will thus have a larger empire sooner. They'll also be able to defend themselves and other cities sooner, and support trade routes sooner. All of that makes distance matter a lot less.

Also take into account that even with significant overlap, your population can also contribute as specialists. For example, if you have a university in your city, a laborer can be assigned to the university itself (or rather, the specialist slot it provides) rather than to a land tile. This will provide science instead of food or production or commerce. The specialist slot from a marketplace, on the other hand, will provide gold. Although specialists don't provide as much as a well-improved map tile (let alone one with a valuable resource), they do provide great-person points. Specialists can be either merchants (+gold), scientists (+science), engineers (+production), or artists (+culture) depending on what specialist building they are assigned to.

With specialists, you don't have to map out your settlements entirely by how far they are apart, since some overlap is more tolerable now than in past Civs. What's most important is what the city will be able to reach, and also, how soon.

To add to other answers:

Even in Civ4 building overlapping cities made sense from time to time. A city working all squares (21 pop) was rare even then for me, so it made more sense to win a good (resource) tile for a (new) city, even when that meant it to overlap on some average tiles with another of your cities.

Note also that city distance does not affect anything in Civ5, unlike in Civ4 where you got increased maintenance costs for cities far away.

... to figure out how close to build cities to maximize my territory ...

Personally I more and more get the feeling than maximizing territory isn't as important in Civ5 as it was in previous games. Also, luxury (and strategic) resources are far more important to get than to maximize territory, because it takes ages to get a city to it's maximum radius (unless you culture bomb your way I guess). Buying territory for territory's sake doesn't make sense either, because it gets expensive very quickly.

It still seems that building a new city as soon as you can afford one (you need enough happiness, because building a new city will decrease your overall h.! -- if the new city unlocks a new luxury resource, than can of course help.) is a good strategy in Civ5, but I find that other factors are far more important than if a city overlaps another: Like how can I max out good squares for the new city, without stealing important stuff from an existing city, even if that means to overlap 50% with an already existing one.

To sum up: For territory cohesion I would go 4 hexes distance (vs. the 6 maximum) but I would build a city even 12 hexes away, I'd get a good resource for it.

I don't think it's quite so simple as "build close, but make sure they can be connected." You can totally have a viable strategy of having a core empire with a few satellite cities harvesting useful/desired items, or a very widespread set of territory to try and get a stranglehold of resources early on.

It all depends on the map and your willingness to risk war with other civilizations. Try playing a smaller map with the "ice age" map-type; I find that in this kind of map where resources are very limited, spreading out fast and hard is a good strategy. Roads between cities aren't such a big deal either, since you'll get access to harbors eventually.

Also, I've found it useful to place settlements/cities near waterways that will choke off movement for other players. If you do this early enough, you can really hamper their diplomacy and ability for trade with other civs and city states. Again, doing this can run the risk of war, but it can also mean your opponents will go to great lengths to get open boarders in your territory, and can set you up as the primary trading entity.

Disclaimer: I've only been playing Civ 5 for about 30 hours and never played any previous ones, so take what I'm saying with a grain of salt.

Well, I'm one of the old breed of civ gamers, I've been playing since 3 and probably sooner had I been born then, so I can tell you some key things about winning a civ V game, you don't have to work EVERY tile that your city has access to, it never gets to be that that small advantage makes the difference in a game.

I find working say the first 2 rings works well and then allowing cities to overlap the 3rd ring fairly liberally, and occasionally the 2nd ring. Any surplus food generated (and I usually make sure there's enough for 1 or 2 specialists) can be put towards specialists.

It is a REALLY good idea though, to have your capitol working a large number of tiles (all the 1st and 2nd ring and most of the 3rd ring), and making sure it favours food over commerce (if you want a large or quick expansion) because that way, you can have a population explosion that keeps producing a lot of citizens to work productive tiles, and then later switch emphasis on commerce over food when high production is achieved.

The first cities which will be built near your capitol should be 4/5 away I find, and then 3/4 tiles away in the case of cities far from your capitol so the border overlapping is only over the 3rd ring of another city, because your capitol will always be your most productive city until you discover and exploit resources such as Iron in other cities, so you might as well grow it into a supercity (capable of working all 3 rings and having a few specialists).

Wait until the first city you have is near fully grown and you have a good lay of the land! knowing how far you are from your rivals can make a BIG difference.

Culture bombs only work within a one panel distance from the border. Study how fast your rivals are growing.

This game gives a lot of leniency when it comes to placing cities though, keep in mind even CPU players build in the dumbest places and can get by alright to a certain extent.

Only build roads to connect your cities so you can get a production boost.

You could also try building on a one tile island if you must as the vanilla game forbids you to disembark directly on to a city. WARNING! Never start a game with the embark ability researched as your founding city can never be destroyed, and your one tile island city can never be captured! this means that the game could be come infinite if 2 players did this. I don't know if this has been patched yet or not.

You have to plan ahead, but you also got to play it by ear at times too. Remember the CPU players seem dumb, and in many cases they are, and the game was designed with them in mind!

Experiment to see what works for yourself! Building cities close together can allow multiple cites to attack invaders and allow you to turtle, but it comes at a price of reduced growth.. Larger cities that are farther apart can allow you to have better growth, but you end up lacking the ability to defend, striking a balance also works! It also can depend on which map size you are on.

Having lots of cities can make unhappiness, but their are ways to deal with that! On the plus side, you can produce a lot of units at once if you are at war with more cities.

Well, try it yourself and see! Just be creative and make sure you can beat the computer before you go online, so you don't embarrass yourself! That is what offline mode is for!!

The max limit of workable tile is 3 tiles. I usually put my cities with between distance of 5-6 tiles. But I definately look out to have atleast one new luxory resource in my city. Let me summarize

For Maximum potential build cities 6 hex apart. Do not overlap and build those cities on resources next to mountains if possible .

You should have them about 5 or 6 tiles away. Enough to cover a lot of ground, enough so that roads are profitable

Trust me, when you get to the end game and every tile has been claimed you won't be so picky. The only requirement will be that it can't be snow. Anyway, I say you should build cities as close as possible (every 4 tiles) because if you have more cities, your empire is going to be much more successful. If I've learned anything from my 740 hours of playing civ v, it's the fact that the only real way to measure one's success in civ v is to count how many cities do they have.

40
Is there a limit to the number of tiles a city can use in Civ 5?
30
Is a Culture Bomb the only way to steal territory from another civ in Civ5?
16
How far apart should I build my cities in Civilization 6?

70
How many cities should I build for a cultural victory?
20
How do I keep from going bankrupt?
4
What should be my objectives when going to war with another civ?
12
How to stop the deity AI from expanding towards you in Civ5?
6
If I destroy a civ should I try to convert the cities to my religion?
4
How to increase city distance limit to greater than 4?
7
Civ V won't let me destroy other cities
12
Am I missing something with managing happiness?
20
Is Infinite City Spam a good strategy on Immortal/Deity in Brave New World?
2
How is the “Soldiers” demographic in Civ 5 calculated?