What are some of the details on taming wild pets?

I know wild pets will exist in Mists of Pandaria and that they must be at 35% of their health or lower before the option to capture them is unlocked, but I ended up with a few questions based off my years of taming pets as a Hunter. Is it possible to accidentally kill a wild pet while trying to tame them? Can you use all three pets on your team to defeat a wild pet or is it just one on one? Once captured, do they level up to an appropriate level for your pet battling, or do you need to level each up individually?

Above is the action bar during pet battles. Each pet is able to use up to three attacks/abilities, these are buttons one to three. Button four allows you to swap your current pet for another and button five allows you to trap the current wild pet you are fighting. The last option is Forfeit that allows you to flee the current battle to fight another day!

Once you have trained the ability to battle with pets, you are able to track creatures that can be captured using 'Track Pets' on your mini map: 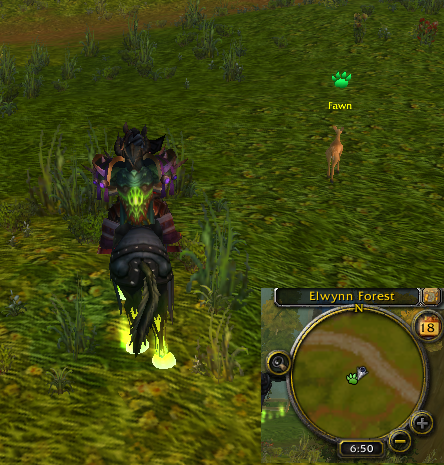 To start a pet battle, simply find a suitable wild pet and right click on them to begin a pet battle.

In order to attempt to capture a pet you must fight until your target pet is below 35% health. This will enable the capture button. You potentially could accidentally defeat the pet by continuing to attack below 35% rather than using the 'Capture' button.

Using the capture button will allow you to attempt to capture the wild pet. It is not a guaranteed capture, but at lower levels it is generally successful.

Is it possible to accidentally kill a wild pet while trying to tame them?

Yes. If your pet is significantly stronger than the wild pet, they could deal enough damage (either normally or via a critical hit) to take the wild pet directly from above 35% to dead in one hit. If this happens, you're stuck looking for a new wild pet.

Can you use all three pets on your team to defeat a wild pet or is it just one on one?

All of them. I let my first battle pet die (by repeatedly casting a non-damaging skill), and my second battle pet came in to continue the fight against the wild pet.

Once captured, do they level up to an appropriate level for your pet battling, or do you need to level each up individually?

They do not level up to an appropriate level. However, they do retain the level at which you trapped them. If they were level 2 when you fought them, they will remain level 2. They will not regress to level 1 but they may drop a level or two if they are over level 15.

5
What's the difference between different quality pets?
5
How many pets are there in Mists and is there a limit?
5
What Achievements, Titles, Items, Mounts and Pets, (etc.) Are being removed in Patch 5.0/Mists of Pandaria?
2
Is there a way to tell between different quality wild pets?
2
Is there a resource that gives a list of wild pets by zone?
0
What instances drop Pets?
4
Is there a location in Draenor where there are tameable pets within seconds of a stable master?
5
What does Heart of the Wild actually do for Boomkins?
2
Nonconsecutive attempts to trap a pet
18
How many levels do I need to level a pet for it to count as “levelling it myself”?