Having troubles getting the "God or Man" conversation from Covetous Shen, our beloved jeweler. Other post on this site (like ALL other sites of the internet) state the conversation should appear between the start of "Beneath the spire" up to the "Prime evil" quest. This link says :

In game, I do only have two conversations: 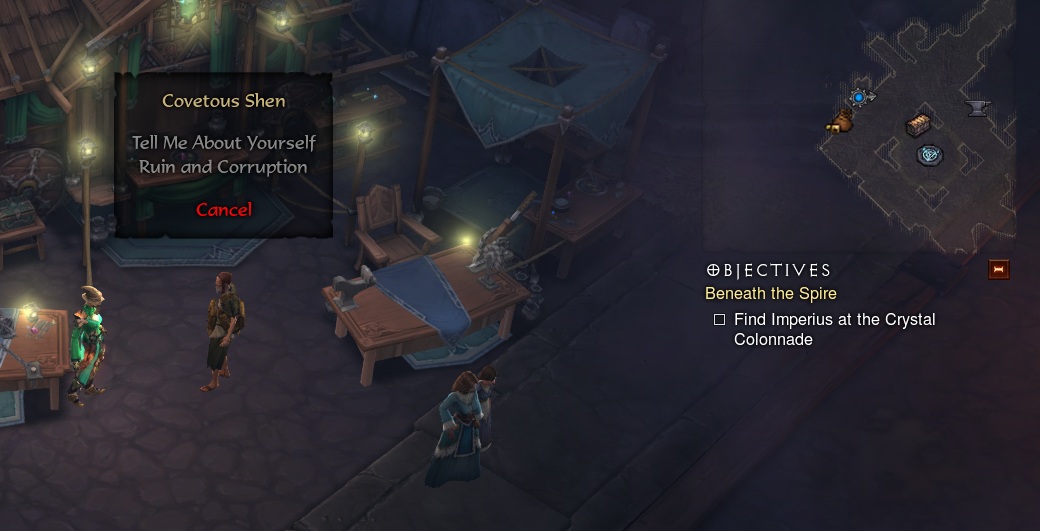 I tried anything... even make the complete act 4 in normal mode and go to town at any quest step (whenever I saw a change in "objectives", I went to the damn jeweler)... but really cannot get this conversation.

I also tried to join a game of a friend having Covetous Shen with the "God or Man" conversation. But for me there was only the two of the linked image.

Please help if you have any idea of what is going on !

Starting a new character fixed it... don't know why. No patch (it's tomorrow morning) and I could get it with this new char. Could still not get it on both my barb 60 and my DH 60 yesterday... Kind of weird. But if someone have the same problem, try making a new char (made WD, but dont think it has anything to do with this).

Note: Sometimes a dialogue option remains hidden until you have opened another one that is available. Also, sometimes they eventually go away later in the game. I believe I had to have "The Hunt Continues" and "Leah's Soul" discussions before "God or Man" appeared to speak about, but this particular conversation should not disappear if you don't get it immediately.

This thread here indicates that some people have had issues getting this conversation to appear available. It suggests starting from the quest before and playing it through to the correct point, and then holding the conversation with Shen.

Your screenshot shows the conversational option for 'Ruin and Corruption' - this is only available during 'Beneath the Spire' after meeting Imperius for the first time - which is not the start of the quest so I would suspect the above should sort this out for you.

19
What is the fastest way to complete “The Art of Conversation” achievement?