What is “Elite” gear?

In Mists of Pandaria, some gear is now labeled "Elite" or "Heroic Elite". I'm used to Cataclysm having items with "Heroic" to differentiate gear earned in Heroic content (to differentiate it from normal and raid-finder difficulties), but this is the first I've heard of an "Elite" tier of gear.

What makes an item "Elite"? Does it mean anything other than a high iLevel? (I notice that there is also "Heroic Elite") 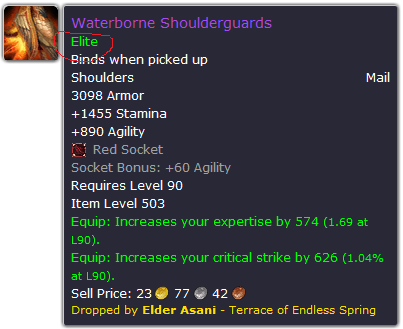 As of the time of answering, Blizzard has revealed one source of the Elite gear:

These items are obtained by defeating Protector Kaolan last on the Protectors of the Endless encounter.

From this, it would appear that Blizzard is moving to, at least in some encounters, adding Ulduar-style "dial your own difficulty" encounters for Mists raids, and compensating raiders that complete the hardest version with a half-tier improved gear.

A Blizzard rep posted in the forums:

These items are obtained by defeating Protector Kaolan last on the Protectors of the Endless encounter.

The Protectors of the Endless encounter is the first encounter in the Terrace of Endless Spring raid. It consists of three "Protectors" - Protector Kaolan, Elder Regail and Elder Asani.

MMO Champion has more information on the encounter here, including a explanatory video of the encounter from raid testing and a loot table.

The raid itself will be opened on October 30 (November 6 for LFR), and will only be accessible to those who have already cleared the Heart of Fear raid.

4
Rare/Epic Gear World of Warcraft
5
Holy PvP Paladin Weapon/Gear Enchant
5
Can you enchant your other characters' gear?
3
MoP: vendor with 372 gear
3
Is there another use for Valor Points?
2
Gear for Pandaria
0
Retribution paladin leveling gear
2
Droprate % of Prideful gear from Celestials?
2
Legendary drops from raid bosses regardless of your lockout?