Is there some organized group or community who like to play custom maps instead of normal melee? I know there are some sites like sc2mapster, but it more about mapmaking, not playing.

Back in Warcraft 3, there were a number of communities dedicate to the play of a very specific custom map: "Defense of the Ancients: Allstars"

While other maps did reach some level of acclaim it was DotA which overwhelmed the entire custom map listing method to the point where no other game could reliably be played.

I took this picture on a DotA light day: 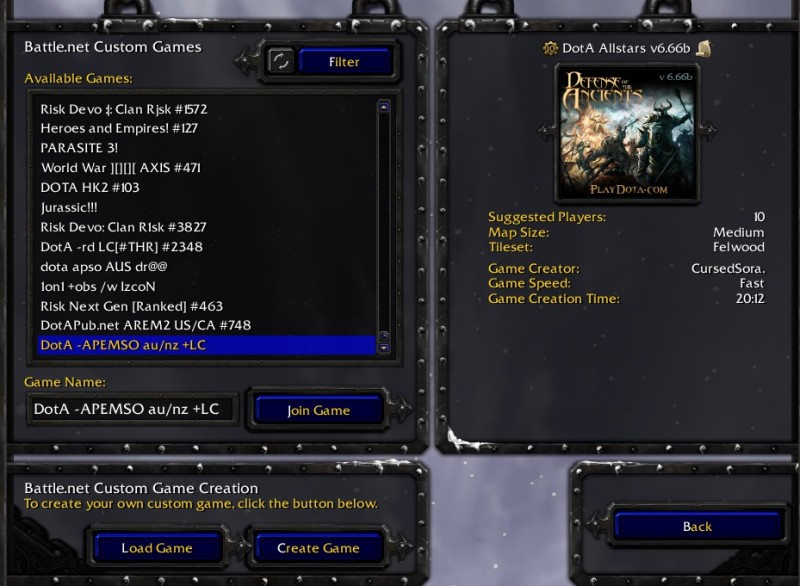 Sadly, Starcraft 2 hasn't been around long enough to receive a game like DotA and its custom map system is far more efficient than its predecessor. The result is no such communities have yet formed.

My advice might be to wait a while, or attempt to start one yourself.

If you go into multiplayer and press "Join a game" under the custom game section you will be able to play custom games and not melee.

12
What speed are most multiplayer StarCraft II games played at?
1
Which StarCraft 2 maps are played most often?
14
What's the difference between a melee and a custom match in StarCraft 2?
5
How to play custom build-anything map in Starcraft 2 with others?
4
Does Starcraft 2 contain a cooperative multiplayer campaign mode?
0
Why does Starcraft 2 custom maps have no imported 3d models?
2
How to complete “StarCraft Master” achievements?