What is wrong with this item stats? [closed]

Ask Question
Asked 7 years, 5 months ago
Active 7 years, 5 months ago
Viewed 506 times
-2
It's difficult to tell what is being asked here. This question is ambiguous, vague, incomplete, overly broad, or rhetorical and cannot be reasonably answered in its current form. For help clarifying this question so that it can be reopened, visit the help center.
Closed 7 years ago. 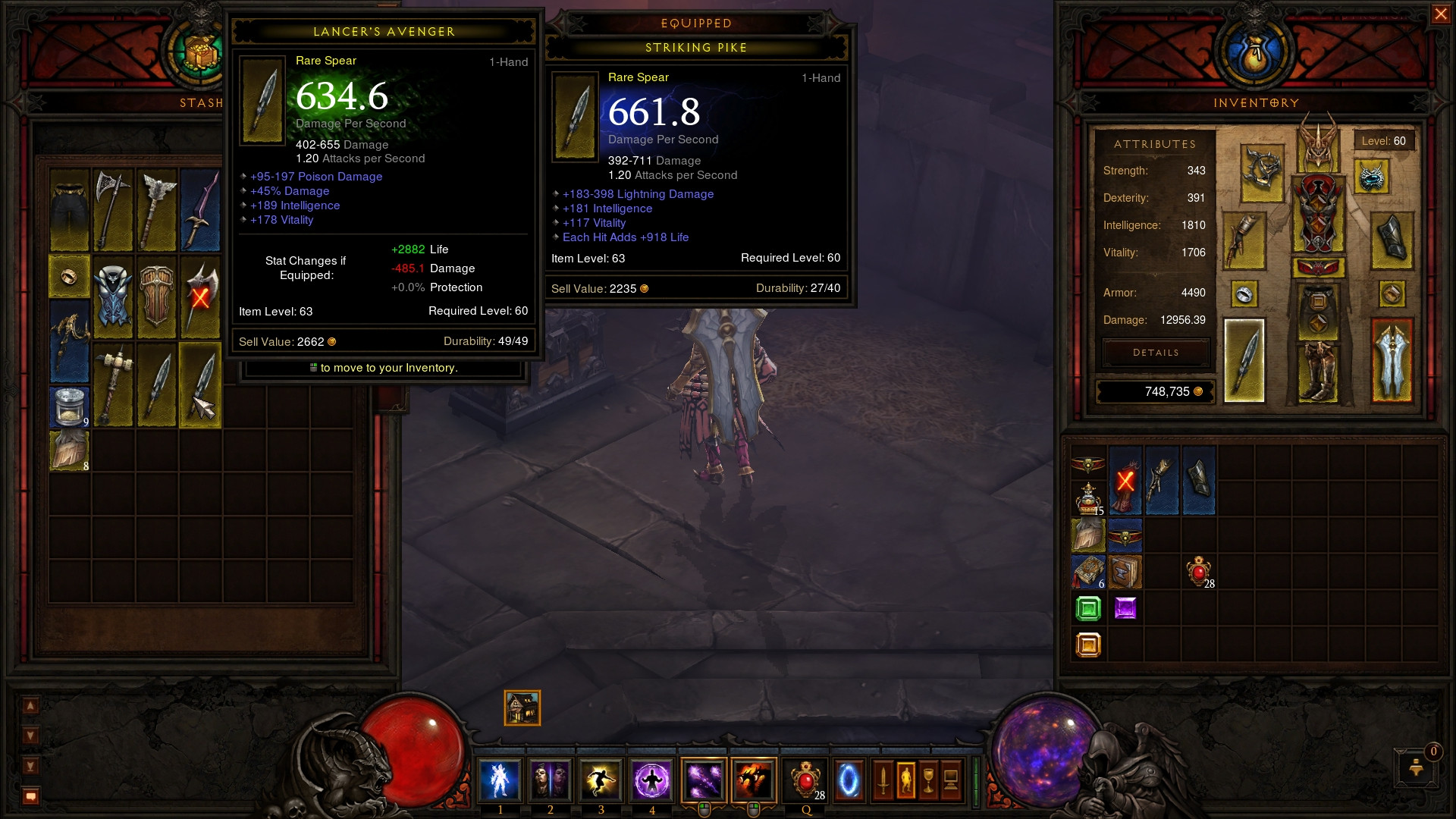 The left spear has

So why is my DPS lower with the left spear? That doesn't seem to make sense.

One possible explanation is that the 45% is already counted in computing DPS.

Update: Turns out the left spear has lower DPS. Never mind. I missed that somehow. That, along with the idea that 45% damage is already incorporated would explain why the left hit less hard.

It's worth noting that both the +45% damage stat and the +elemental damage stat is incorporated into the DPS figures quoted on the item.

In this instance you're comparing the following two items;

I would not expect the price difference to be caused by the 8 additional intelligence on the item and the other two stats in this instance are calculated into the DPS value on the item, which turns out to be slightly lower than that of the Striking Pike, leaving the difference between the two as vitality.

At a guess, I'd say it's because the one on the left has four affixes. Don't be fooled by the number of stats, and pat attention to the fact that the Vitality on the spear on the right is noticeably lower. This is because it probably has an Int/Vit affix rather than separate Int and Vit affixes. There's no good reason to expect the games valuation formula to place a premium on damage, or, for that matter, on any other stat in the way that the player base does.

Beyond that, as Fbueckert notes, item valuation is not particularly well understood, and, more importantly, completely and totally irrelevant for all but the absolute worst and lowest level items, so the real answer here is: Who Cares?

Your image is a little too small to read the text, but it looks like the weapon on the right has +900 life on hit. This makes it a great weapon for people who are building tanky like Barbarians or Monks. 900+ life on hit on a 1-hander is on the higher end of the scale.

83
What does the Damage stat on the character sheet actually mean? How is DPS Calculated?
5
How is the weapon damage on this weapon calculated?

0
Equipped weapons of Wizards and their Durability
18
Demon Hunter build for Inferno
1
Wizard Using Disintegrate Weapon Choice
13
Why does Disintegrate deal more damage than Ray of Frost?
5
Does Minimum damage and Maximum damage tooltip make sense?
2
Is a weapon with higher min/max damage better than a higher DPS for Demon Hunters?
2
Is avalanche much better than earthquake?
4
Elemental Damage vs Skill Damage