Effective use of Sentry in Starcraft 2

I find my self following other players and pushing with few zealots/stalkers/1-2 sentries, and enabling the shield once attacking. But i'm not sure I'm fully taking advantage of this unit. Should I let it be between the zealots and stalkers? Should it be in the back - so it won't die... etc. In early game push, how should I best use it?

I think both of the other answers here discuss what sentries can be used for, so I'm going to concentrate more on the how instead of the what.

The basic usage of sentries are as follows:

PeterK alluded to the idea of preventing an opponent from reinforcing his natural by controlling his ramp so let's delve a little deeper into that. All the standard maps have a fairly small ramp that connects the main to its natural expansion. This ramp can easily be blocked by a single force field on the top or the bottom. When used aggressively this can prevent a player from moving out of his main to his natural. To accomplish this you'll want to control the "bottom" of the ramp. Its key here to use the bottom (and not the top) as it forces any ranged units to fight from the ramp where they have a poor arch and can easily be destroyed.

Because of the effectiveness of this technique, opponents must redeploy their forces toward the bottom of their ramps instead of the top. When faced against early harassment by a Protoss player it is wise to rally your units to the bottom of your ramp for just this reason. While Zerg players will often adapt to this quickly, Terran players often struggle with this concept. If you're in a TvP I would suggest the following:

For Protoss players wishing to use this technique you should note the following:

Splitting an army is another technique often used for Sentries. It relies on the shorter range of many Protoss opponents, and pushes large portions of their army out of range, leaving a more favorable battle. Remember it is easier to fight an army one half at a time then all at once. The key to a "good cut" here is to build your force field lined perpendicular to the direction of battle, and to cut through the middle of the enemy forces. If you cut too shallow you risk wasting energy. If you cut too deep then you risk fighting the entire army all at once. 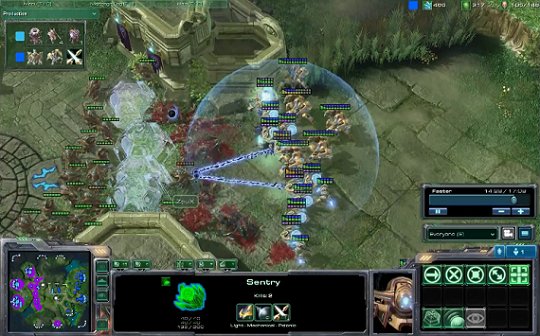 Here Liquid`Nazgul has cut his opponent (ZpuX's) Hydra/Roach army in half. Because the force fields take up space, his opponents Hydralisks caught on the far side can't reach the remainder of his forces. While normally such an immortal heavy army would fall quickly to Hydralisks, by cutting off just the Roaches he's left himself a favorable battle and significantly reduced the meat shields for the weaker Hydras.

You'll also notice that Nazgul engaged where there was a nice choke that he could use to extend the range of his force field. By using the terrain in this way he reduces the number of force fields he has to use.

Bare in mind this technique is effective against long range units like Hydralisks and Marauders as it pushes some out of range while some remain in range. However, if you're using a Zealot heavy force you'll find that its far more effective to using force fields to prevent a retreat than to split an army. In that case place the force fields behind the offending Marauder ball for maximized lulz.

The final two uses for Sentries are much less potent than the previous two, but still worth mentioning. Hallucinations make good scouts, and half way decent meat shields. Its worth noting that flying Hallucinations really do fly, giving you good vision. Additionally, Probe hallucinations spawn in groups of 4 allowing you to gain vision over large parts of the map quickly.

Guardian shield is an invaluable tool as it provides 2 Armor against ranged units. Its worth noting that ranged units with a melee animation (Hydras and Roaches) do not have their damage reduced while in melee range.

There are a many situations where the sentry is extremely useful. I will give you a few examples (i'm sure tzenes will add more info):

When you see that your opponent went for a fast expand and he is guarding the ramp to the main with his army, you can throw down a few force fields to block the ramp, snipe the expansion/harvesters and run away (if he has superior force). Even better, if he has forces guarding the expansion and nothing in his main, you could try to run into the main, block the ramp with force fields and severely damage the main base. Note that scouting and fast reaction is key to success here.

Force fields are also great for separating enemy army into smaller groups and killing each one separately or blocking the escape route of retreating enemy units and finishing them off.

Another thing used a lot is to research hallucination and create a phoenix which then can be used to scout. If you are careful, you can make your opponent think it is a real phoenix (do not shoot anything so he wont notice it does not do damage). He might then lose time/resources to defend against air and your land based army can destroy him.

The obvious use of sentry is of course the guardian shield. Use them when facing ranged units.

Remember. The key is to learn to use shortcuts for using the abilities of units (sentries in this case). In the heat of battle, there is no time for activating the abilities with your mouse! As for positioning in your army, i keep my sentries in the back of the army, but they should be always close enough to use their abilities effectively.

You should have your sentries in the middle of your army, IMHO. By doing that you will be able to:

Putting your sentries way back in your army will prevent you to fully use guardians shields and may delay your force fields because of the casting range.

Especially in early pushes this will give you an edge if micro'ed correctly. Some players will try to snipe your sentries, so you should micro them back if they do so.

PS.: PeterK has some really good points too.

Very thorough answers which touch on what I want to say as well. Stalkers and sentries are a natural combination in early games. Of course stalker and sentry forcefields work very well together. But I want to note that harassing by stalkers and hallucinated phoenixs as needed is another great use. Hallucinate a phoenix to see high ground allowing the stalkers to blink up to the enemy main. When the troops guarding the ramp react. blink the stalkers down, forcefield the ramp and attack the expansion.

Not the answer you're looking for? Browse other questions tagged starcraft-2 starcraft-protoss .

1
How to keep sentries and templars in the center of death balll?

16
How to effectively manage supporting and different types of units?
9
How do I beat Insane AI in 5 minutes?
5
Is micromanagement of early units "required" by Protoss?
13
How to counter marine rush as a protoss on maps with huge ramps like Scrap Station?
16
What is an effective counter to late-game Protoss balls in TvP?
5
Why zerg taking a third to P's FFE or T's double Command Center is only an equilibrium?
6
Terran bio versus Protoss
1
PvZ: how to play vs early roaches?
1
How to force field properly? In particular in PvZ?
4
Best Attacks Against Bunker Early Game StarCraft 2?