How do I beat Dracul puzzle #2: Restless Dead?

I'm stuck on the 2nd puzzle of the Fresh Blood puzzle pack (the ones dealing with the god Dracul), titled Restless Dead. 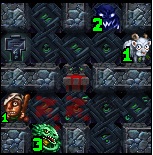 I can't seem to get enough damage to kill the dragon and win the puzzle. How do I solve it?

If all you're looking for is a hint, solving this puzzle requires both an understanding on how the Burning property on the fireball works, and understanding how strike order works and the fact that you get first strike on creatures that are lower level than you.

Getting more in-depth, you need to nearly kill the wraith with fireballs, getting two stacks of burning on it. Then you attack the dragon to trigger burning, which finishes off the wraith (which you get 4xp for, since we're still level 1). Then you use Blood Curse on Dracul's altar to become level 2 so that you can first strike the goat (which would otherwise kill you, since you only have 1 health left). This will level you, refreshing health and mana, and allow you to finish off the dragon.

Finally, here is the step-by-step:

Not the answer you're looking for? Browse other questions tagged desktop-dungeons or ask your own question.