Cities naturally 'grow' tiles with culture points. The map tiles around your city become the colour of your civilisation, which means that your city can 'work' those tiles. A city also has the ability to purchase these tiles at a cost of gold.

You can join cities by linking their workable tiles together. I understand that doing so gives a territorial border, but are there any other reasons for doing so?

I want to build cities along the coast, which will be joined by harbours, but I am unsure if not linking their tiles will cause me problems.

The image below illustrates three cities that are joined by workable city tiles: 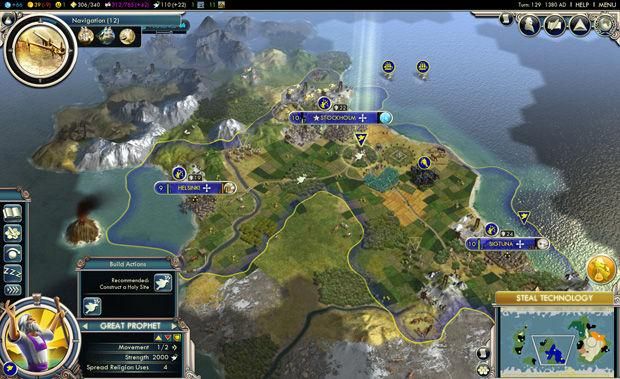 It brings no mechanical advantages, only strategic ones, which include:

So nothing really big except distance to travel for defensive units. So if you can defend anyway, don't trouble yourself too much with connecting your borders (but later add cities to use that terrain (or not if you want culture costs low).

Maybe enemies will settle between your cities and then you can puppet them ;)

Harbors will connect cities to form a trade network, which means that resources found/upgraded around one city will be available to the rest of your cities. The other way to do this is by road.

Roads have other benefits though, in that they allow the fast movement of units between your cities. This greatly benefits you if you need to move military units around due to changing political conditions.

You could build roads across non-owned tiles, but then there's a chance another Civ or city state will eventually take that tile, which may lock you out of using that road, depending on the political situation. Being surrounded by potential enemies with no means to reinforce is a recipe for being conquered.

You could also try to buy up at least a one tile wide strip between your distant cities, assuming they were near enough together to allow this. This is going to cost you, though, as the gold cost per tile seems to increase with distance from the city center.

This also makes your roads longer, which will slow troop and worker movement. Also, roads cost gold you per tile used. This is offset somewhat by the gold income from trade routes, but not really enough to justify very long roads.

You could make each city an independent entity, capable of defending itself, but the maintenance costs associated with this strategy make it only worthwhile when the situation you're in requires it.

Personally, I take a middle of the road (no pun intended...) strategy. I tend to settle cities far enough apart that they have as many independent tiles as possible, and so that they are individually located near important resources. However, I also try to keep them close enough together that the road costs aren't prohibitive, and so that I can move troops quickly as needs arise.

41
Is there a limit to the number of tiles a city can use in Civ 5?
14
Do you have to allocate a citizen to work a resource in order to gain access to it?
7
What are the ways of improving water tiles?
12
Luxury tiles are 6 tiles apart: grow one big city or two modest ones?
15
How to stop the deity AI from expanding towards you in Civ5?
4
Is it true that cities only use resources within 3 tiles from your city, no matter your city borders?
12
Am I missing something with managing happiness?
2
What are the mechanics behind tile acquisition?
3
Tiles 3+ upgrades