How are champion stats calculated?

How are these stats decided? Is there a certain protocol for how champions might excel in one area versus another? 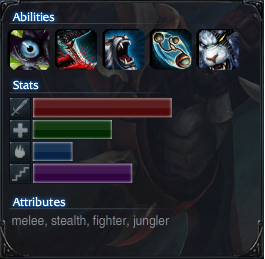 Those stats are an approximation of a champion's overall ability, and do not imply any base stats in particular. The game does not use them for any calculations. In general, a champion with a high "Attack" bar will be expected to have effective autoattacks (or will deal a lot of physical damage through abilities), one with a high "Health" bar will take a lot of hits, one with high "Magic" will deal a lot of damage with abilities, and one with high "Difficulty" may take a little longer to get used to.

In particular, "Attack" includes things like Base Attack Damage, Base Attack Speed, and any abilities that enhance basic attacks, such as Tristana's Rapid Fire or Fiora's Riposte. It also considers abilities which deal physical damage, so AD Casters like Pantheon have a high rating as well. Since champions tend not to deal much damage without being in range, Gap Closers (like Rengar's Unseen Predator) or a high Attack Range also may contribute.

"Health" includes not only a champion's Base Health, but also their Armor, Magic Resistance, and abilities that protect or sustain one's self, like Shen's Feint, a self-shield.

"Difficulty" is very rough, though champions with more skillshots (like Ezreal) and champions with unique mechanics that can be hard to master (like Orianna) will have a higher rating. Interactions between abilities also can drive up a champion's difficulty. A champion with high "Difficulty" may have a high skill floor (minimum skill required to begin to be effective), a high skill cap (maximum skill before further improvement with the champion is no longer possible), or both.

8
How are recommended champions determined?
2
What makes a good support champion?
2
How are champion displacement moves prioritized?
8
Can a Champion jungle effectively without Smite?
2
Should I try to Counter Pick the enemy champion if I do not know how to play the Counter Pick itself?
1
What are the different champion compositions and resulting playstyles to a 5v5 team?
1
smart cast option for a specific champion?