What is strength for?

In the game there is a stat of Strength and items that increase it, however, I haven't seen any influence of that stat. How does it affect death?

Strength has a (significant) impact on the amount of damage you can do (per second).

To check this you can go to your Inventory and press Enter (for PC) to toggle your Character Stats to bring up the primary weapon dps (damage per second) and the secondary weapon dps.

To demonstrate this, i started with equiping a piece with 41 strength. This gave me the following stats: 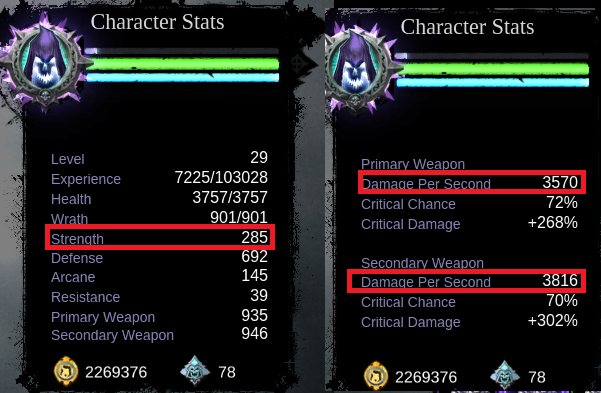 After that, i equiped a piece with 55 strength, which gave me these stats: 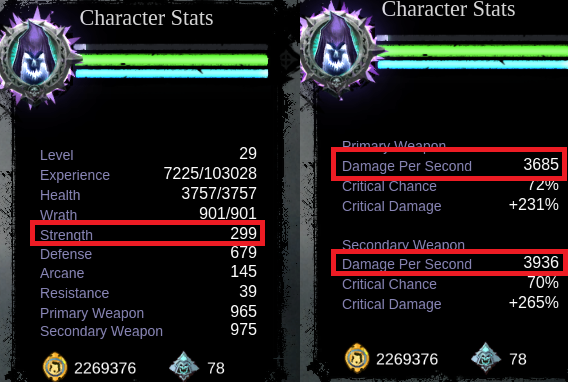 I have not found the exact correspondence between Strength and weapon damage per second, but from what i stated above, it should be clear that stacking Strength is pretty profitable.

That being said, it's also worth to note that Strength has no effect whatsoever on the damage done by your skills such as Teleport Slash or Harvest. Those skills are effected by the Arcane stat.

To show my latest note isn't a made up thing, we start with a Juggernaut Talisman, giving 23% critical chance and 37% critical damage. We now have a primary dps of 3239 and secondary dps of 4591.

We now switch to a Necromancer Talisman, giving us 23% critical chance and no critical damage.

Does the same account for critical chance? Absolutely. We start with Possessed Armblades with no critical chance and a base damage of 410, (190+220) resulting in a dps of 3233.

Now, one might wonder why the Primary weapon and Secondary weapon during my first example changed. This is simple because those stats are directly derived of the damage per second of the corresponding weapon. The dps of both of the weapons changed so naturally those stats increased aswell.

As for the Defense stat, yes that changed aswell. It's sort of hard to find items that just differ in the stat you want to test, but i'm fairly sure it's safe to assume that Defense won't change anything about our Attack.

And finally, it's worth noting that every stat is independent. An increase in Strength is not gonna change Critical Chance or Critical Damage or vice versa.

First of all, Strength affects the damage on Harbinger skills (on all except the fire damage on Teleport Slash).

I don't know the formula for calculating the DPS based on strength; if you want to find it, I suggest you do the following:

You need two weapons of the same type with different damage. Write all the DPS values for at last ten strength values to make a guess about how it could scale, and to check how crit and crit-damage scales. Its even harder because it doesn't show up in the DPS-value, so you need to take the popup values in battle (insane), and that would be good since I've heard that crit-dmg caps(falls off) at ~300%.

1
How does loot work in Darksiders 2?
0
Is it possible to easily calculate a weapon's DPS In Darksiders 2?
4
What's the difference between the Normal and Apocalyptic difficulties?
6
How do I earn Reaper Energy?
13
Soul Arbiter's Maze Solutions
3
What happens when I die?
4
How can I get this goblin out of the ground?
2
Stuck on The Key to Redemption - Find the Archon
0
Specific vine wall isn't graspable