How do I optimally use the Ion weapons (Ion Blast, Ion Blast Mark II, Heavy Ion)?

I would like to know how to optimally use the Ion weapons ((Ion Blast, Ion Blast Mark II, Heavy Ion). 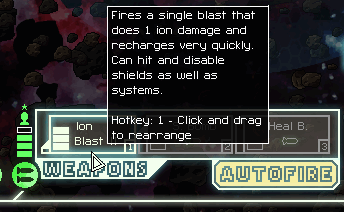 With that goal in mind, I have these questions:

How long does each Ion weapon disable an enemy ship system? This is so I can know if it is optimal to regularly change room targets with an Ion weapon to disable two systems or more at the same time (if Ion weapons can disable a system for a long amount of time), or if it is better to keep it locked on at a single room to keep that room's system disabled at all times (if Ion weapons only disable systems for a brief period).

Having had to depend on an Ion/Beam combo, I've worked out the Critical thing for Ion Weapons is consistency.

As agent86's answer says, Multiple hits within the "Lockdown" period stack, but the minute that timer runs out, the locked system restores to full.

So your aim is to keep the lockdown timer on any disabled system from running out. Therefore you should be focused on ensuring on repeatedly hitting one system within its period rather than spreading ions around other systems.

To illustrate; if you bring shields down to 0 with ion, then target weapons, you have to hit the shields again before the lockdown on the shields lifts, otherwise they'll restore, and then while you're bringing them down again, the lockdown you've put on the weapons will lift.

If instead you keep hitting the shields, you'll keep resetting the lockdown timer on them and they'll stay down. At this point your other weapons pick up the slack and tear into the non-ionned systems.

Once you have low enough shields that other weapons can penetrate (e.g. your lasers can bring them down, or your halberd/glaive can breach them), you want to focus at least some of your system damage on the helm and engines. Remember, every miss with an ion weapon is bringing you closer to a timer reset.

One useful trick is to alternate between ionning a single system and the shields (e.g. one to the shields to reset their timer, then one to the weapons to lock them down). However you increase the chance that one miss will lead to the shield lockdown running out, especially with the slower Heavy Ion cannons. (Which is why faster ion blasters are more expensive/require more power than ones that do more damage).

I hope this helps!

Ion weapons don't do permanent damage to rooms or a ship's hull, but when they hit they will count as if you'd done damage to that room equal to the weapon's damage rating for around 5 seconds after impact.

Multiple hits of an ion weapon before the time runs out add 5 more seconds to the timer, in addition to counting as additional temporary damage.

If the enemy has shields up, and the ion weapon hits the shields, the ion damage effect occurs as if it had hit the shield room. If there are no shields (or it is an ion bomb), then the ion weapon will effect the room where it is aimed.

Systems effected by the ion effect can also not be manned, so any crewmember bonuses will not apply.

If your weapons crew is capable of firing their ion weapons very fast, it is possible to disable multiple systems with it. However, in practice I find that unless I've done more permanent damage to the shields system of a craft, it's hard to do much more than hit the shields with ion laser weapons. Ion bombs can be highly effective at disabling key systems though, as they bypass shields and the effect can't be repaired, unlike standard systems damage.

Ion damage is temporary and unless you have level 3 sensors it is best to be single-minded in your use. With two mk1 ion bursts you can keep shields down permanently as you will be adding to the timer slightly faster than it expires, and more importantly the disabled shields do not come back until the entire timer expires. Because some shots will miss, don't get greedy. I recommend setting the ions to autofire on shields and never changing targets. It will take approx 32 seconds to completely remove shields, less if you have many attack speed upgrades, more if you miss a lot.

Combine with a pike beam (or two!) and you can significantly damage all non-shield enemy systems, while keeping shields completely out of the equation. One beam pass will take out most pilot systems, ending their dodging; two will take out any medbay, enabling your boarding party to finish them, and will likely disable their most dangerous weapon (probably some sort of missile). Beams don't miss, so they're reliable damage.

Zoltan B comes uniquely well equipped for this with 2 burst ions and a pike. Having the zoltan shield buys you about 2 rounds to strip shields, usually enough, and definitely enough later on when you have your own shields. Buy/find 1 more pike and upgrade weapons two more times and you'll be all set. Might want to actually get shields by the third sector though.

Generally, beam+ion is the best combination since ion is best at disabling the only defense against beams.

If you're lucky enough to get two Ion Blast Mark II weapons on your ship, you can pretty much keep an opponent's shields AND weapon systems permanently locked down. An ion blast every 4 seconds at each room will keep those systems offline indefinitely. Of course, this tactic also requires you to have another method of damaging their ship available (boarding parties, drones, another weapon), and since Ion Blast Mark II guns require 3 power each, it also requires you to have a fairly beefy set of upgrades made to your ship already.

Still, if you can pull it off, it's pretty much the cheat code for winning the game.

As an avid user of the Engi ship, ion damage of x removes x bars of power from the hit system for 5x seconds. Hitting the system again will reset the timer. If you have a leveled up weapons man, you can ion shields and another system with the ion blast mark II. Generally, I go for oxygen. However, it is often best to just keep it on autofire at the shields. Also, I believe that ion damage does not allow you to add extra power to ioned systems. Therefore, a good tactic is to damage the shield room until there is only one level of shield and autofire ion weapons into shields. This will keep shields more or less permanently down if you do not let the timer run down. if it does, the shields will be fully repaired and will go back up.

This said, a good strategy for the boss is to have 2 ion weapons and at least 3 laser shots. In my case, I had the ion mark 2 and heavy ion, hull laser mark 1, and an anti-ship drone mark 1. Ions should be autofired into shields, and lasers should be fired wherever you want, probably weapons. Anything that damages personnel in the room they hit should be fine. If you have piercing weapons you don't necessarily need 3 laser shots, just 2. I recommend having a defense drone to deal with the missles. Those hurt. Level 4 shields are more or less required. Cloaking helps, but isn't needed.

When I beat it, I had level 7 weapons, level 4 engines, 4 shields, level 4 drones, level 1 cloaking, level 2 doors, level 2 sensors. In this fight, have all systems manned. If you get a 1-shield enemy with non-piercing weapons early game, just autofire ion into any system you want except oxygen. Using this method, you can level up all your crew in all specialties. This really helps late-game, especially the weapon cooldown and dodge.

If you're using a ship with 4 weapons slots, have 2 ion weapons with a total of 3 or more ion damage (take down 2 layers of shields), and at least 3 shots of laser. Another method would be at least a burst laser mark II and a beam. Go for pike or glaive because they have the longest beams and will most likely do more damage.

3
How do I defeat the Flagship with an Engi ship, focusing on Ion Weapons?

28
Tips for killing enemy crew without use of boarding parties
7
Anti-drone tactics?
1
What counts as "using only missiles" for the second Rock Cruiser achievement?
35
Is there any benefit to damaging enemy Sensors?
3
How do I defeat the Flagship with an Engi ship, focusing on Ion Weapons?
12
What are the tactics associated with stunning weapons?
8
What are the easiest ways to deal with AI ships when playing as the Mantis Cruiser?
11
Does a beam weapon have to hit a crew member - or just the square they're in?
18
Does FTL make enemies stronger once you get better weapons?
19
How many ions a day keep the rebels away?