I'm looking into buying a complete Xbox 360 setup within the next month or two, including speakers, decent display, etc. I would like to use some kind of LCD monitor instead of one of the crappy big fuzzy CRT TVs I already have.

I'm wondering what I should use for the sound and display, though. 1080p LCD monitor, or lesser display resolution? HDMI vs. component? Analog or digital audio? I also find very little information online about what kind of outputs the Xbox 360 is capable of out-of-box, which is troublesome.

I've tentatively chosen a few items, but I really don't know if the setup will work properly or if there's a better set of hardware for the task.

For the display, I picked out the ASUS VH242H. It uses HDMI, carrying both video and audio through the cable, and has speakers attached (or built in?) to the back of the display. I am concerned the audio quality will be poor, but I'm not sure if the Xbox supports HDMI video + some other audio output at the same time. I also have concerns about price, and most digital speakers I could find were very expensive and designed for much more elaborate setups.

Anyone know what outputs the Xbox has, and which audio/video outputs would be best to use? And what should I be looking for as far as speakers go? I seem to only find big expensive digital ones designed for home media centers or tiny analog ones for office workstations.

I also elected to add a spare wireless controller. I wonder though, how long do the batteries last? Do controllers lose the signal at all? Would it be better to buy a couple wired controllers instead?

Thanks for your help in advance!

I currently use a setup similar to what you're going for. I'd say as long as the monitor supports HDMI and 1080p, you should be fine visually. Not all games run at 1080p, but for those that do you'll get the best image possible.

The Xbox 360 does support audio over HDMI, but you can opt to use either RCA or digital audio instead if you want. All of the manuals for Xbox 360 hardware are available at http://support.xbox.com/support/en/us/nxe/hardware/manuals/InstructionManuals.aspx (although I don't see a manual for the new Xbox 360 S that was released a few months ago, but I'd guess that as far as you're concerned the Elite manual should give you the info that you need). The manuals go over the various combinations of audio and video that are supported, so hopefully that would be able to answer your questions.

For speakers, I'm currently using a 2.1 Logitech system that I've had for a long time. They meet my needs, but I'm no audiophile. I'd suggest not using your monitor's built-in speakers, since those types of speakers tend to not be very good.

I also have a Turtle Beach headset which is much better than the headset shipped with the console - both game audio and voice are sent to it, and it auto-balances the sounds during game play so that voice chat doesn't get lost among the game's audio. Since the headset is wireless, it requires two AAA batteries, but I use rechargeable batteries and they last for a long time.

As for controllers, the only time I've noticed a loss of signal is when the batteries are getting low (but then again, I'm sitting at my desk only a few feet away from the console). I've also noticed that battery life is quite good, but I use standard rechargeable AA batteries rather than the Microsoft battery pack.

To answer your question about the wireless controllers:

My kids have a 360 with one wired and two wireless controllers. The batteries in the wireless controllers seem to last a reasonable length of time (weeks rather than days), but the actual time will depend on how much you play. The kids are on the 360 most days but only for an hour or so a time - we don't let them stay on all day!

We did get some rechargeable battery packs that plugged into the USB socket, but these broke as the plug was on the bottom of the controller and when it was left lying on the floor (as is inevitable with kids) the controller got stood on or sat on too many times which bent the plug. If you do get a rechargeable pack then it might be worth paying the extra for an official one were the connector is on the front of the controller. 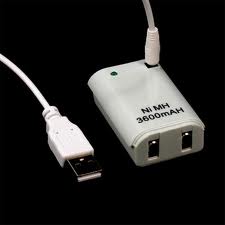 I can't find a picture of the good connector.

The alternative is to get a pack that recharges in a docking station, but that means you can't play while the batteries are recharging.

For what it's worth, I wouldn't get a computer monitor at all for an Xbox 360.

Modern HDTVs have plenty of definition and contrast ratio, and the sound output is far superior. You could hook up the RCA-out on the xbox to a proper sound system if you wanted, but that makes no difference when it comes to choosing a display (you could do that with a TV or a monitor). You can get a smaller (28" or less) TV if space is of a concern, or if you want the flexibility of being able to use it on a desk.

As far as manufacturers are concerned, if we're going with a HDTV I'd highly recommend Phillips or Sony, depending on how much you've got to spend. Phillips are excellent at a normal price range, and Sony are good if you want to blow a large budget.

If you really want to go for a monitor over a TV, you will definitely want to invest in external speakers, since not a single monitor on the market has anything capable of reproducing the quality of sound that the Xbox 360 is capable of.