Elemental damage effects (e.g., explosive, shock/electrocute, corrosive/poison, incendiary/fire/burn, slag) usually come in a "Dmg/Sec" format. Do these effects have a standard length once triggered? Is it affected by fire rate or other attributes? Similarly, how long do grenades that "continually damage enemies" within the grenade's "area of influence" work their magic? Can this time value be augmented with items or other perks? 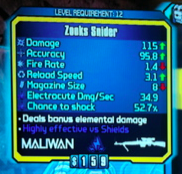 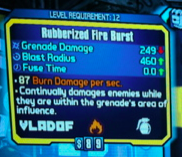 The length depends on the elemental damage type. I found these out by testing with Target Practice in Marcus' shop in Sanctuary.

This means a Corrosive gun with the same damage/second as a shock gun will deal much more damage than the shock gun if you let the effects linger. It also lets you stock a lot more Corrosive/Fire effects on a single target than you can Shock effects, but Shock effects will usually drain a shield so fast you can switch to another weapon to deal the health/armor damage instead.

Note that certain enemies resist these damage over time effects entirely, and bosses may take elemental damage for much briefer periods of time; for instance Terramorphous can only be Slagged rarely, and when it worked Slag only works for 1 second. Most normal enemies don't have shortened effect times however.

30
How can I effectively play Siren?
26
What is the quickest way to compare the DPS of two weapons?
28
How do I use elemental effects in Borderlands 2?
5
How can I estimate how much elemental Damage over time I'll cause?