How does mission progress work in multiplayer?

In the first Borderlands, I got quite frustrated with the confusing affects multiplayer had on my character in singleplayer. Many times, someone in my party got a message saying they were ineligible for a quest and that they would not get credit for it. Eventually, we all decided to make characters that we would all play only with each other and never play in single player. This was quite an unideal solution.

I tested this today. Here were our findings:

The host controls which missions are available or not. (Enemy and weapon levels are based on the zone.) However, those missions can be accomplished by anyone in the host's game. Once completed, that mission is completed for all participating characters, even if they weren't normally able to complete the mission because they hadn't progressed that far in the game in single player yet.

All participating players receive the same XP, rewards, and mission completions for their character.

In other words, if you run with someone who is further ahead in the plot then you, when you leave and go back to your own game (not on the host's co-op server), then you will see any missions completed during that time with the first host, even if you haven't got to that point in the game yet. Then, once you get to those missions that you completed on another host's game, since the missions are already complete for you, you can just go on to the next, uncompleted mission as normal.

As a host, the game progress is the same as if you were playing single player. 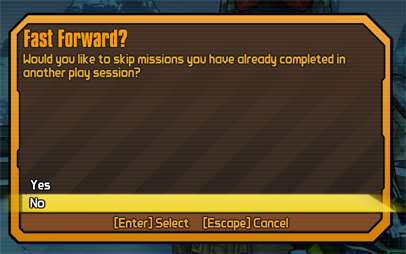 So yes, in my opinion, they "fixed" the ineligible mission message from the first Borderlands.

If you complete a mission, then go back either on your own in single player or as the host, after having already completed it previously in a previous session, you get a message in the reward screen saying something along the lines of 'you have already completed the mission and received your reward' and then don't get the XP or item again — because you already got it the first time you completed it.

Playing through in Vault Hunter Mode doesn't count against this repeat reward limit though; missions there can be completed once more of course before you would get this message again in VHM.

9
How does Bore work?
8
How does auto-pickup work?
2
How exactly does Elemental Resist work?
6
How does loot from containers work?
5
How does Critical Ascension work?
1
How does Resurgence work?
4
How does "Bonus Elemental Damage" work?
10
How is a Borderlands 2 multiplayer game hosted?
8
How does Sharing is Caring work?