Is there a reason I'd want to disable my Badass stat bonuses?

As I've been playing I've been spending my Badass tokens on various upgrades, giving me a small and mostly unnoticeable boost (so far) to things like reload rate, gun damage, fire rate, etc.

Every time I'm on this screen, I see that I have the option to disable these bonuses. 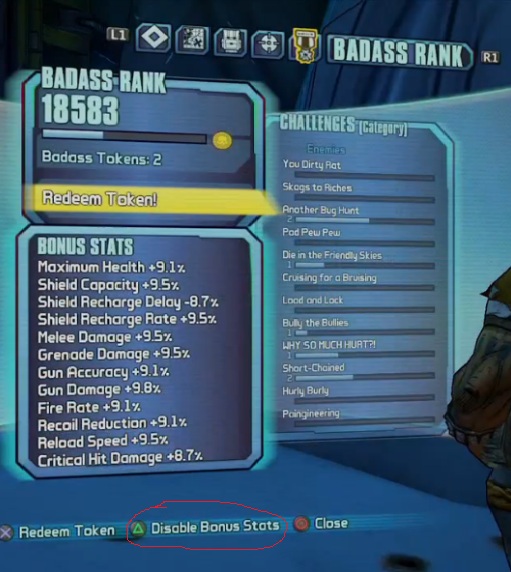 Is there any reason I'd want to do this other than, I guess, to have slightly more challenge by having slightly inferior stats?

It's probably for Min/Maxers or as Kotsu says, people who want to make the game harder.

I have noticed that sometimes I'll need to wound enemies and my attacks will slaughter them outright; if the badass bonuses were pushing my attacks from 2 hit kill to 1 hit kill I could potentially want that. It's pretty edge-case though, and all of the bonuses are only positive unless you're trying not to kill something or die more.

It could also be for Duels now that I think about it; it'd be rather rude to take on a "fair" level 10 duel but one of you is brand new with no badass bonuses to speak of and one of you has +crazy% of everything.

This feature was probably added for gameplay purists. If you started a new character, you might wish to disable bonus stats so that the game would be just as hard as it was when you played through it the first time. If you had a +10% boost on all of your stats starting at Chapter 1, I imagine the game would be significantly easier.

The first time I went to play the game, I was playing with a friend who already had maxed out 3 characters and had +insanity to everything. He started a new character and didn't bring any guns over, but I still felt next to useless next to him, so I wasn't having fun. I imagine that turning them off would have alleviated that problem.

In addition to what Ben and Kotsu say, It is also useful if you want to calculate a weapon's base damage without your stat modifiers by using the, ahem, "target" in Sanctuary.

As others have mentioned, there are a few good reasons to disable the Badass ranks:

Single-Player: While the stat boosts seem marginal at first, if you've already played through a few times already, they start to add up. While I personally enjoy this, it can make starting over with a new character much less challenging, especially through the first half of the game.

Co-op: If you have a friend over and are starting a new game, it would only be fair to play on a level playing field together, not just for dueling, but for overall gameplay, especially if your friend is new to Borderlands: With the ranks on, you would not only have the advantage of playing experience but all of the extra stat boosts as well, which could hamper the fun for a friend playing for the first time.

That all said, I love the Badass ranks and think it was a great improvement over the first Borderlands in terms of replayability.

5
How can I estimate how much elemental Damage over time I'll cause?
7
Is there any reason not to farm Terramorphous on Normal mode?