How does the gold multiplier on some weapons affect damage?

On some weapons, the weapon damage stat includes a gold "x[Number] " multiplier. For example, this one: 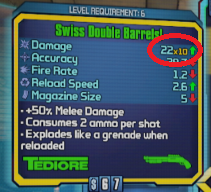 What does this multiplier mean, and how does it affect damage output? Does it only apply to shotguns, or can it be found on other weapon types?

The first number is the base damage of each bullet and second number (gold one) is the amount of bullets fired each time you take a shot.

This multiplier can apply to all weapons in the game.

How it applies to shotguns:

Each bullet (shell) fired from a shotgun splits into multiple pellets.
The first number is the base damage of each pellet and the second number is amount of pellets fired per shot.

How it applies to other guns:

First number is the base damage of a bullet and second number shows you how many bullets you fire with each shot. Even though they fire multiple bullets with each shot they only consume 1 ammo per shot.

It's also worth mentioning that weapons with damage (bullet) multipliers other then shotguns are not very common (they are somewhat rare).

It means multiple bullets come out of one shot. Like buckshot. There is a spread; the spread value is different for each weapon and is not shown anywhere in the inteface/game.

9
How does Bore work?
17
Does accuracy affect in-hand weapon sway or just how accurate bullets are?
3
How does damaging Shields, then Health work for elemental bonuses?
2
Does "consumes X ammo per shot" cancel the assassin's One Shot One Kill skill?
3
How does The Bee work on multi-projectile weapons?
2
How to solo Hyperius?
3
What types of weapons or ammunition won't work with the Siren's Chain Reaction skill?
4
What percentage of damage is restored as health to the wielder?
1
Do low level weapons have less effect then their damage status?