How can I effectively play Siren?

Siren seems to be one of the less common classes and most people don't know much of how to play it aside from "elements and SMGs".

What you need to know

You're going to deal less damage per shot compared to other classes. It's really hard to estimate how much damage your elemental effects deal too; don't focus on the numbers, focus on the chaos you wreak. You're going to kill a lot of people, even if it's not in one shot. And in Coop play you're especially valuable; your elemental effects will distract or weaken enemies for your group to finish off easily.

You need to know elements. Read this, the whole thing. You need to eat, breath and excrete elemental effects.

Also, explosive isn't an element. Not for a Siren anyway; you get no bonus out of explosive guns, give them to someone else and pick up a gun that can melt some faces.

It's possible to play Siren without focusing on elemental damage...but it just doesn't make much sense. The elemental chance percent boost is insane and costs only 5 skill points for +30% chance per shot.

Good things come to those who wait. Things like the horrible burning demise of your enemies.

Since elemental guns do Damage Over Time you'll be able to leave an enemy for dead once they've taken enough damage and enough elemental effects have stacked on them for them to die without further gunfire. Take this time to reload more often, duck behind cover to recharge shields, or light up the next target.

As you play you'll get a feel for when an enemy is "done for"; this is the point when the passive elemental Damage Over Time is likely to kill the target with no more direct attacks from you. Watch health bars closely and you'll start to get a sense for this. Don't overkill targets; move on to the next enemy. Enemies with DOT effects shoot less anyway (they're panicked) so just leave them to die and start whittling down the next target.

Note that Shock, Fire and Corrosion all have different effect lengths and guns have different damage per second; you'll need to acquire this feel per gun but you'll be amazed how quickly you start to intuit when an enemy will die. The exact times are listed here, knowing the rough length of the stacked effects will help you estimate when you can stop shooting.

Note Phase Lock holds the target still, usually with their Critical point exposed and stationary. This is a great opportunity for you or your teammates to pile on the damage.

Depending on skill tree you can turn Phase Lock into an elemental Area of Effect weapon, a tool for healing yourself/teammates or a way to control enemies (or some combination thereof). They all have their uses, generally I'd pick the Phase Lock variant based on the other skills in the related tree rather than picking the tree just for the Phase Lock skills; all of them work well. Experiment and respec to try all three as you gain enough skill points

Really the Siren can effectively use any kind of gun; the reload speed, magazine size, bullet velocity and damage boost skills help all guns pretty well. From Rocket Launchers to SMGs you'll be able to hit targets more easily and spend less time reloading. You don't have (explicitly) gun specific skills unlike other classes.

Your gun choice is mostly determined by elemental effects; since your +30% elemental effect chance is per bullet, fast guns make the most sense. In the time it takes to hit one target with an epic Rocket Launcher, you could have stacked insane Fire damage with an SMG of comparable stats and left the target for dead.

Note that most non-Siren players don't like/appreciate/use elemental guns. Many will immediately pass over any Maliwan weapon because, at a glance, they do less damage. You know that's not true, but you can use this to your advantage in coop; most players will willingly give first-dibs on elemental weapons to Sirens. Just ask and make sure it's cool with your friends; you get a lot more out of those guns than they can. If you're playing with other Sirens there may still be loot fights of course.

You will seriously need one gun for each elemental type. I actually keep one SMG and one Sniper Rifle for each elemental type, but try to have at least 3 different elements equipped at once and always be ready to switch to the right element for the job. You don't always need a Slag gun, but be sure to have Fire Shock and Corrosive at the ready.

Note however that your fast reload speed, increased magazine size and reduced damage per bullet (because elemental guns do less straight-up damage) means you're going to run out of bullets. A lot. You're going to want to make sure you have at least 3 or 4 different types of guns (even if you don't keep them all equipped).

Personally I keep around a supply of Sniper Rifles and SMGs with Pistols or Assault Rifles as backups. The SMGs and Snipers run out but I'm never completely out of ammo if I keep 3-4 gun types at once.

This is my current offensively oriented Siren build that I've found to be extremely effective in both solo and group play. 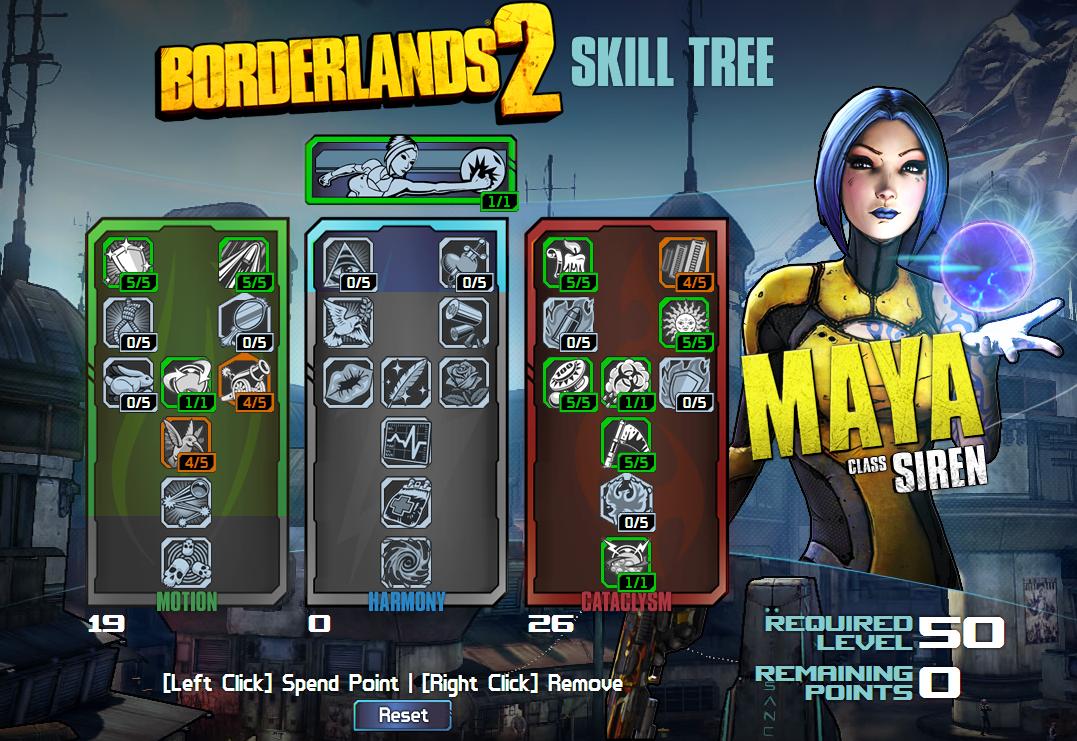 When used in conjunction with the Teapot, I start off every fight by causing all 4 element damage to a huge group of enemies in the area. On top of that, chain reaction further compounds the incredible AOE effect of the teapot even more. I also like to throw in a grenade into the mix for some truly sickening aoe damage (bouncing betties or MIRVs do best here, slag or electric are both good, to cause extra damage or strip enemy shields).

To maximize the corrosion damage, its best to corrosive damage amplifiers to boost it even more.

My phaselock ability is set for high cooldown (duration doesn't matter since your whole goal is to splatter enemies with slag and to pull them together so teapot can get to work).

If by any chance they raise the level cap so I can get more skill points in the future, I'd put the rest of the points into quicken, then get sub-sequence and suspension for some truly ridiculous phase lock action.

Playing co-op I make sure to pick up the skills res, scorn and fleet. Combined with the rough rider and a good cool down relic I zip around the battlefield, regiving teammates, slagging and phaselocking enemies like nothing. My preferred weapon of choice is a torgue ravager shotgun for this. Good for second winds and hit and run attacks.

Shields and elemental damage. Since she has some skills that improve shield capacity, always get turtle shields (you won't need the health anyways since you'll never run out of shield). Get shield-improving bad-ass points, and class mods, and you'll easily become the tankyest member of your team. After maxing shields, focus elemental damage/chance. Since you are now considerably tanky, I suggest high fire-rate and low accuracy weapons (smg, pistol, shotgun(?) ). Always get up close and aim for the weak point. Your elemental effects make it so that they are unable to attack you as much (due to their pain and screams of terror), so you should be able to finish them off considerably quickly. After the biggest threat is neutralized, go for the next threat and so on. As for phaselock, use it to incapacitate high-damage/health targets, or targets who's weak points are covered. During phaselock, you should run up to them, and spam your smg at their weak spot. If one phaselock doesn't cut it, ( and the opponent still has a considerable amount of health) then you take out other targets until phaselock regens, after which you repeat the process. Turtle shields + badass points into shield capacity + ward skill + class mods with shield increase + inertia, makes you an unstoppable tank on the battlefield, whereas Good guns and high elemental damage/chance take care of the damage.

(I used the same strategy in borderlands 1, where I'd become a shield-tank, and spam my double-anarchy and elemental smgs in the enemy's face, and whenever my shield dropped [which rarely ever happened] I'd just phasewalk untill my shield regen'd)

I like to use the Siren for support only in co-op. It makes sense because you get credit for every kill anyway. I use turtles as well, but high capacity absorb shields work great for not always having to go into enemy kill boxes for ammo. Max out your healing (Harmony) and damage (Cataclysm) trees and you can be the anchor of your team. I recommend buddying up with a gunzerker. Have him run close to the nearest enemy, and activate his double gun skill for near instant kills on most mid/high level leaders and even some bosses.

Solo, I got with the damage tree and the motion tree. Thoughtlock works great, as you could possibly turn their strongest fighter around and just detonate their squad. Its always a great feeling to turn around and kill him with a phaselock. I like to keep two elemental SMG's,(I was lucky enough to get, and I highly recommend farming for it, the Hellfire from Scorch in Frostburn Canyon) a shotgun, preferably elemental, but a really good Jacobs will do, and a Tediore rocket launcher, for second winds.

Build up anything having to do with shields or elemental. And put some points into the movement speed skill, you'll be almost impossible to hit.

28
How do I use elemental effects in Borderlands 2?
8
How long do elemental damage effects last?
7
Do Sirens get any bonus out of Explosive weapons?