Does air pressure equalize more quickly if the doors are open?

If a room has no oxygen, does opening the doors help replenish the oxygen more quickly? In other words, does oxygen equalize between adjacent rooms with open doors?

I moved my whole crew up to the front of the Red-Tail, and evacuated the back half of the ship, leaving oxygen in only the three front rooms. This reduced my oxygen total to 20%. Then I closed doors and started timing every 10% increase.

Next, I opened all the doors between depressurized areas but left closed the doors in the front which were still pressured. 82.6 seconds, basically the same as my first test.

Finally, I depressurized only the back three rooms of the ship, turned off my O2 generator, closed the outer doors, and opened all the inner ones. The three back rooms re-pressurized despite my generator being turned off until they equalized with the rest of the ship, which was also steadily losing oxygen; eventually the whole ship depressurized.

This behavior is explained by a model where the O2 generator works by supplying a fixed amount of oxygen to each room per second, oxygen is naturally consumed slower than this replenishment, and oxygen diffuses only between open doors. This means if a room with a high oxygen level has an open connection to a room with a low oxygen level it is giving oxygen to that room and receiving replenishing oxygen from the generator nearly as fast as it is giving it up and the other room is receiving oxygen from the generator, resulting in overall faster replenishment. If the doors are closed the new oxygen in the already-pressurized room is just "wasted".

Because the oxygen level required to keep your crew alive is fairly low it's often good to open doors to help re-pressurize areas faster assuming your oxygen generator is working.

FTL's model of oxygen seems to match our intuitions about how fixed volumes of gasses in an enclosed space work.

One interesting prediction of this model is that a sufficiently long path length of rooms may make it possible to survive indefinitely with a working generator despite a door open to hard vacuum. I've been testing this prediction on the Osprey for several minutes now, and it seems to be true. 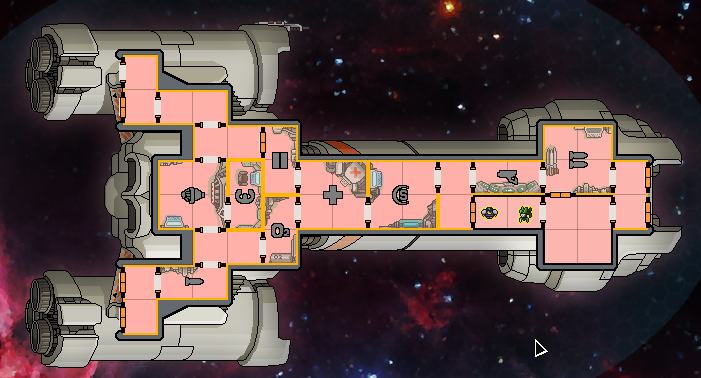 If I open the second door on the top left, the room Mr Buga and Liam are in de-pressurizes. If I close it but leave the top one open, it re-pressurizes.

It's a bit difficult to say since the game doesn't give accurate feedback on a room's oxygen levels. The game does have some sort of oxygen flow system. That much is evident from the fact that we can a series of doors to the space and vent out the air from all the rooms.

My experience says that the oxygen levels try to equalize, but there seems to be a limit to the rate at which they do so. The visible difference between two rooms with a door open between them tends to linger for a good while.

I've also noticed that if I open all the doors (except the outer ones), my overall oxygen level (the percentage shown in the upper left corner) will regain faster.

In short: All signs point to yes. Altough, to a limit.

14
Does it matter if I open one or two doors?

29
How do I optimally use the Ion weapons (Ion Blast, Ion Blast Mark II, Heavy Ion)?
30
If my doors are stuck open, how do I manually close them?
18
Is it possible to escape a fight without fuel?
7
Can I lock my doors?
19
How Do Doors Keep Fire from Spreading?
11
How to get the "Loss of Cabin Pressure" achievement?
3
Who is the best fighter?
13
How long does it take for a Lanius to drain a room of oxygen?