How to kill the Gluttonous Thresher?

How can I kill the Gluttonous Thresher? I died like 20 times and it's taking all my savings!

I'm level 16 and can't kill it. I use my saber turret to break its shield, but after that I can only deal like 200 damage and after a short time its shield regenerates.

Is there a strategy which doesn't use the rocket launcher? Because the only one I have found is level 17?

I ran all the way back across the river, where there's a place you can climb up a ladder to a weapons chest. While I was standing there, the thresher just stayed in the doorway. I used a shock weapon to take its shield off quickly and then fire weapon to kill it. Pretty easy once I did this.

This thing is unquestionably a bstrd! It doesn't seem to have a realistic way to consistently defeat it. It buries down, and comes out on you whatever you do. Unless you get lucky and it gets stuck.

BUT... I noticed that the robots will attack it. Again, you need a bit of luck to ensure they aggro it early enough, but I literally sat back and watched as my turret and the loaders did the job on him. I pumped a few shock rounds in to him with the sniper just to keep his shields down. I must have failed on this 15+ times, and on that go I barely fired a shot!

You can cheese it by jumping into the river and climbing up one of the ladders on the other side to the previous area. The thresher can still fire projectiles at you but won't follow across the river, so it's pretty easy to find a stack of crates to stand behind and fire continuously at the thresher without being hit by the projectiles at all.

This guy was tough at Lv. 17. I lured him out to the previous area — he can only get so far in — then stood far away enough that his tentacles couldn't reach me and blasted his face off with high-powered shock weapons.

You'll see a lot of robots start dropping in the area of the thresher. Do NOT kill them; instead, lure them towards the thresher. They will start fighting each other, at which point you should just retreat to a safe distance and snipe/shoot. Having a shock weapon will make this more effective as the robots' attacks will penetrate, doing most of the damage.

I killed it, just get an incendiary SMG/Combat Rifle with a lot of damage and fire away, and try to be level 17. To get back across the water just jump in because there are ladders on the other side.

If you are playing as Siren, you can phase lock the thresher, which knocks out its shield and causes a little damage. I went in and got it to follow me back out. Ran across the bridge, then opened the bridge up for cover. Step out and phase lock it, then shoot a few rounds for damage. Before your shield is depleted, step behind bridge for cover, and phase lock cool down. After cool down, step out and phase lock, etc. Doesn't take long. On mine once the damage got low, I actually killed it when I phase locked it.

The monster comes with some robots, so leave them to fire at him and the monster will kill all the robots. Then left with half life, you can easy kill him with some grenades and shock weapon.

I just kept jumping to its eye. When I tried that note that I died when he was at (pretty much) no health and the Hyperion bots just killed him in one hit; also note that I was at level 13 or 14 so you may actually kill it and get the xp unlike me.

I used a regular high powered quick load pistot to break the shields, then a SMG with burn effect to take down the life points, then a projectile shotgun to add extra damage. I was staying at the control box on the other side of the water and used it as a sheild for the rocks-whatever the hell it was throwing to keep the damage down. When it dove down and rebuilt its shield I started again with the high powered pistol to break its sheild and did a rinse and repeat. I was stuck at this level for a bit until I read the other folks posts. Thanks guys, y'all helped a lot. Biggest thing is cover and guns that are affective for your level.

Along with the other tips, there is a pillar you can jump on by going around the big building on the left. The loaders can still hit you, but the thresher can't.

I let it battle the Loaders in the area to distract it and used electric and fire weapons on it from afar. I also used my Phaselock power (playing as a Siren) on it and that damaged it quite massively. Only problem is the Thresher might kill all the loaders before you can put in some major damage and it will start attacking you.

If you're playing commando, use the crate to the left from the other crate when you come in the area. Wait until it pops up next to you, throw down a turret, it will be focused on you so the the turret will get critical hits on the target. Repeat. I killed it with three turrets cycles. 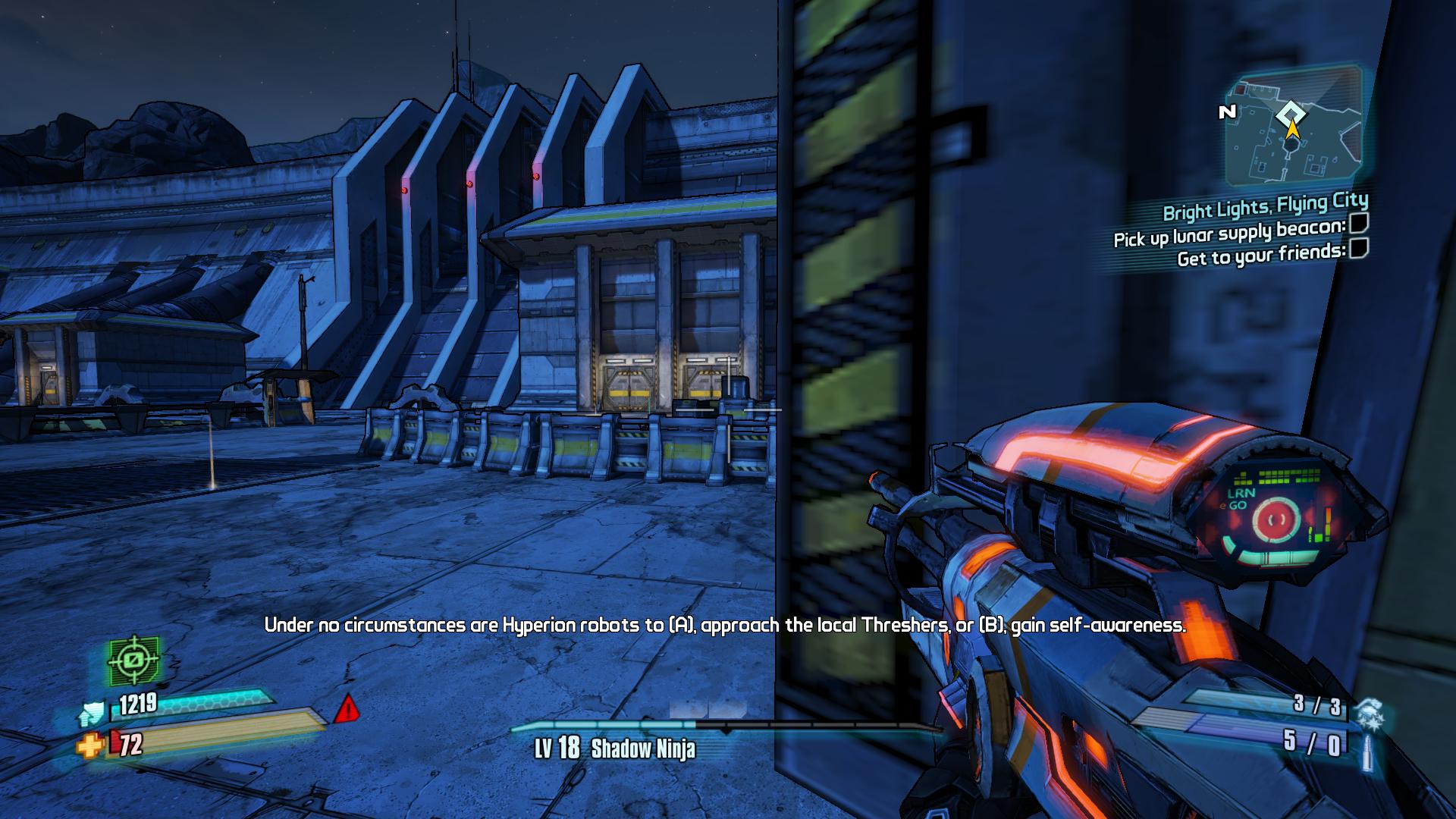 This guy was a pain in the butt. But using what people above have said, I equipped a Shock sniper rifle in one slot and a Fire one in another. I engaged him, and tried to find that ladder people spoke of. I was getting owned on my way there, and tried to hide around this corner by the gate leading into the area to regenerate my shield. He followed me, and if I was crammed far into the corner, he couldn't get at me.

I'd quickly poke my head out then back into the corner to make him pop up from the ground, wait for him to strike while I'm in the corner, after he does then pop out and fire a shot or two from my Shock sniper rifle to drain his shield, switch to my Fire sniper rifle and unload on him in the eyes like someone said above. Once I found this out, it was pretty easy -- I could shoot him, and he couldn't hit me. As you can see though it took a lot of rounds to do the job, I went in full and only had 5 rounds left, lol.

It would probably be just as effective with a gun with more rounds though, but those were the only shock/fire guns I had on me.

Edit: Just want to clarify that he could actually get at me occasionally even crammed in the corner, but my health was at 72 the whole time around the corner. The time between his hits still gave my shield enough time to regenerate, and it's a really slow one to regenerate too.

All right, you guys, Here's how it works. Lead the thresher into the previous area, there is a bridge to the other side of the canal. The Thresher will not follow past the large doorway. On the way to the other side of the canal (across aforementioned bridge), there is a small booth with an switch in the center. This booth is JUST tall enough to block the thresher when it throws a projectile. I didn't even use a shock weapon and it was easy as pie. I used a Vladof fire assault rifle. It took a bit of ammo, but I didn't have a shock weapon on hand. Got the kill, got the XP, it was great.

7
How do I kill Crystalisks?
4
When are kill skills triggered?
3
Where can I grind the “kill lots of things” challenges?
12
Optimizing Axton for Solo Play
7
Can I avoid Terramorphous' Blackhole/Wormhole Thresher attack?
9
How to kill the W4R-D3N?
4
I constantly die
1
Do kill skills stack?
7
Why is Voracidous the Invincible forcing the player to respawn without causing enough damage to kill?