How is critical hit damage calculated?

In Borderlands 1, critical hit damage was based on a weapon's critical hit modifer (which was sometimes hidden) and "how critical" the hit was.

Does the same apply to Borderlands 2? How do the different critical hit bonuses interact?

Critical hits multiply the weapon's damage by two factors: first, the critical multiplier of the weapon type; second, the sum of all bonuses to critical hit damage (usually from abilities, but also from sniper rifles and a few weapon parts).

Weapons with the effect "Deals Bonus Elemental Damage" apply their bonus damage after the critical hit damage is calculated. That is: bonus elemental damage is not multiplied on a critical hit. 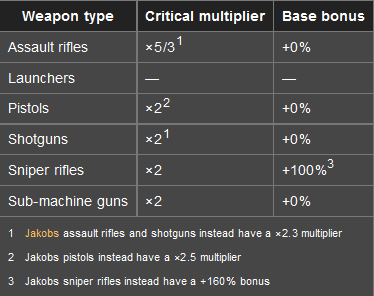 I have done some of my own math, and I got base damage figured out, but critical damage is being a little trickster right now. I looked around and I heard you also have to calculate in "how critical was the hit". What I get from that is that each critical point on each enemy gives a different bonus. I came to this site from Google to find the answer to my/your question, but maybe we can help each other. Here is the info that I wrote down and maybe from my info you can do further calculations to figure it out. First to make sure I even knew what the hell I was doing I ran a simple test with base damage. Here is what I got.

Zero was my character. Weapon - Callipeen - 883 damage I had to make sure I looked at all my stats: Class mods, skill trees and badass points. the only modifiers I had towards gun damage were: +6.0% from badass points and +8% from the Vel0city skill. Then I had to see if the damage was compounded or just added on. It's just added, the game would be too beast if it was compounded but here is the calculation:

The game rounds up but I was completely correct. I had to take in account that one of Zero's skills adds damage the longer you aim down the sights. So in general here is a formula for finding your base damage

Also I sort of disproved the idea that each company or each type of weapon has a hidden damage. There still may be a hidden crit. damage but I don't know yet.

Having encountered Sniper Rifles with stats like "+120% Critical Hit Damage" that seemed too good to be true, I was wondering the same thing, so I decided to run some tests.

Methodology: I took an alt (level 15 Zer0), respecced him to ensure that talents did not influence his numbers, and turned off his Badass boosts. All damage testing was done at Marcus's shop in Sanctuary on the firing range Bandit (also level 15). Zer0 was using a Turtle shield and a Professional class mod (no weapon or critical damage effects on either). I took two body shots and two head shots with each gun (Each pair was identical, so did not take further confirmation shots. May be worth doing in the future.). I noted three different damage ratings for each rifle: the listed damage, the center mass damage, and the head shot critical damage.

Results: My spreadsheet Note the H column in particular.

Conclusions*: Jacobs sniper rifles have massive critical damage multipliers (5.2). Maliwan corrosive and fire rifles do extra damage to flesh, but use a lower crit factor (3 instead of 4). It's worth noting that having a 120% critical damage multiplier on a Maliwan rifle or a Hyperion shock rifle seems to add 10% to the total crit multiplier (column H). This leads me to suspect that the 120% critical damage boost means the weapon's critical multiplier is increased by 20%... and then that the weapon's critical factor is responsible for half the total critical multiplier. In turn this means that the bandit's headshot factor is 1.5, the Maliwan rifle's factor is (1.5 x 1.2) 1.8 for a total of 3.3.

*All critical multipliers refer to the combined target and weapon multipliers

For the things I have tested, it seems like it's a difference of crit damage for different weapon producers. E.g. Jacob snipers crit for more than Hyperion. Also weapon type has something to say. Seems like revolvers and snipers crit for more than SMG or assault rifles. More testing will be done, but because of the badass points, i'm not sure about the math, yet. Of course, only non-elemental (and non-explosive) damage is able to crit.

BlissBliss
111 bronze badge
add a comment  |
Screenshot of the Week

6
Do critical hit bonuses from the Sniping tree apply to melee attacks?
4
Does throwing Krieg the Psycho's axe when Buzz Axe Rampaging count as melee?

5
How does Critical Ascension work?
7
How is “Bonus Slag damage” calculated for Slag-Licked?
3
How is extra damage done by explosive weapon calculated?
4
Do Adaptive shields adapt to non-elemental damage?
4
Which explosive guns can cause critical hits?
8
Why do elemental DOT effects sometimes deal 1 damage each hit?
4
Does throwing Krieg the Psycho's axe when Buzz Axe Rampaging count as melee?
4
Is the Mechromancer / Gaige's Zapper Class Mod description text wrong? How exactly does it work?
4
How do Badass Rank modifiers in B2 affect stats?
4
What percentage of damage is restored as health to the wielder?