How close does the final boss have to be to lose?

I have made it to the flag ship 5-6 times and each time I have beaten phase 1.

However after phase 1 my hull is less than 50%.

Some times I went and attacked phase 2 anyways and other times I ran for a repair point.

Either way I have lost by hull destruction or by the flag ship reaching my base before I can get to it after I went to a repair point.

The last time I calculated how many jumps before the final boss could get to my base but I was wrong and still lost because he destroyed my base without actually being there on that node.

My question is: How close to your base does the final boss have to be to make you lose? Is it possible to repair between fights or should you just attack at 50% hull?

With the Advanced Edition, this is explained in a block of help text on the "JUMP" map screen: 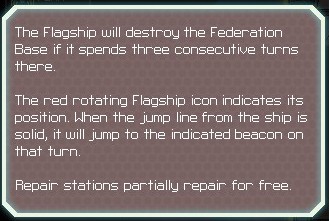 Your ship will start towards the left of the sector. The Rebel Flagship starts towards the right. You can jump or wait if you so choose, but every move/wait will cost you nodes in the sector, and the rebel flagship will move closer to the base.

The rebel flagship alternates between jumping and orbiting a node. Thus, it moves roughly half as fast as you do.

Whenever you beat a phase of the boss, it will jump away from you. Thus, it's a viable strategy (especially in the late phases where all the nodes are Rebel-occupied) to just sit in the Federation Base node and wait for the boss to come to you.

Repairing is only really feasible in the early going. After you've met in the middle and fought it out, chances are good that you won't be able to jump to a repair node without jumping through a rebel-controlled node. In addition to dealing with high-level rebel ships, cruisers will also fire on your ship constantly, similar to being in an asteroid belt (but more dangerous).

When you're in the final system, on the beacon map you will see a counter telling you how many jumps you have until the Rebel flagship is in range of the Federation base. This number is measured based on the number of jumps the flagship has left, and the flagship jumps half as fast as you do. That means that you've got around two times the number of jumps shown in order to intercept it. I'd trust this number over any other method of determining it's relative position, personally. 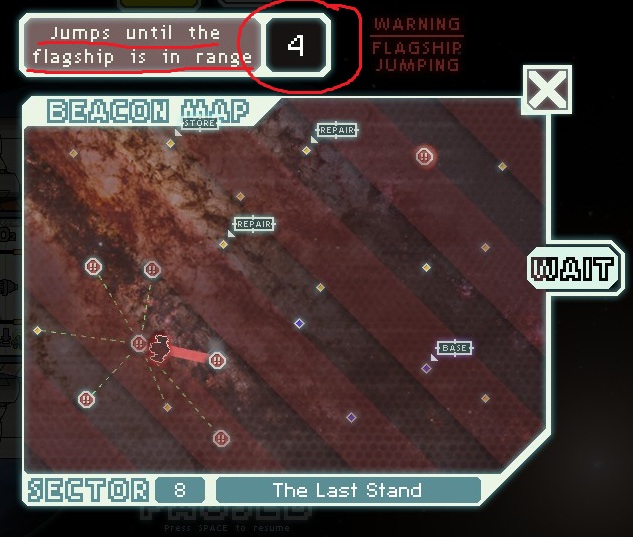 Since each encounter in this system is likely to bring you up against difficult rebel ships with minimal rewards, I don't tend to find it that productive to jump around any more than absolutely unnecessary in order to intercept the flagship.

However, depending on how many jumps you have left and how damaged you are, you may wish to repair between fights. However, a better plan is to avoid damage, either with shields or dodge. Get your engines powered up as far as you can, and/or have a cloaking device to boost your dodge chance. Shields will protect against energy weapons and beams (if they hold out that long...)

Also consider prioritizing damaging the flagship's weapon systems, as that missile launcher especially is killer. The systems are isolated and have just a single crewmember guarding them in the early phases, and the rooms were empty for me during the final fight. A teleporter or missile/bomb launcher can make damaging these systems early in the fight easier.

There's more strategy for beating the boss on this other question.

The flagship doesn't get any easier between fights, so trying to take on the second or third form with a low amount of hull remaining is unlikely to end well. Still, sometimes you've got to play the hand you were dealt...

As of the Advanced Edition content addition, this non-standard Game Over has been changed somewhat.

Instead of you starting at the base, you and the Flagship start on opposite sides with the base somewhere in the middle.

The Flagship will still jump once for every two jumps you make, but this time it actually aims for the base. Once there, it will stop jumping and sit there. If the Rebel Flagship sits on the Federation Base for three of your jumps, you lose.

Taking out one of the Flagship's stages will cause it to move. From there it will idle, then jump back to the Base and try again. This effectively gives you five turns to go find a Repair point and return, should you need it.

82
How can I beat the final boss in Faster Than Light?
19
How does sector 8 work?

82
How can I beat the final boss in Faster Than Light?
16
What happens if I kill the crew of the first form of the end boss?
16
How can I rescue my boarding drone from the final boss?
11
Does the stealth cruiser have innate stealth weapons capability?
30
If my doors are stuck open, how do I manually close them?
3
Final boss impasse
3
How do I defeat the Flagship with an Engi ship, focusing on Ion Weapons?
13
How does the Zoltan Explosion work?
15
Can I 'win' with all my crew on board the destroyed final ship?
5
Does the 'Engi Virus' have side effects?