Do I really score more for murdering everyone and hiding their bodies?

In most stealth games, the game rates you as having done the best job if you get in and out without anyone being suspicious, and without killing anyone. Mark of the Ninja is no different - there's a score bonus for being undetected, and a score bonus for making it through an entire level without making a kill.

However, there are also large score bonuses for murdering people in particularly brutal fashion. For instance, consider a vent kill:

If I avoid him instead, though, I just get +400 at the end of the level, plus if I manage to do the entire level perfectly I might get +3000, but with 20 or more guards per level, this works out to 150 or fewer points per guard.

Stacked on top of this, I could have gotten "Undetected" (+200) by hiding in the room with him previously, and/or "Distracted" (+150) for getting him to look the other way by breaking a light for example. These bonuses can occur either way, though, so they're not useful to this discussion.

That leaves us with 850 points for a kill (or even 650 in the worst case where I don't get "fancy" about it and just stab him through the neck while his back is turned) versus ~550 for leaving him undisturbed.

It seems to me like the best idea is to murder everyone and hide their bodies. Is this the case, or are there other bonuses/points I can get from being especially sneaky and not very stabby?

You get a bonus for finishing the level undetected even if you use distractions, so adding Distracted, Undetected, and Terrorized bonuses to the points for getting kills and hiding bodies is silly -- you can get those points regardless of whether or not you kill the guards.

The special kills that give you more brutality options and more points all have to be unlocked. When first playing the game, sneaking may be the only options a player has.

Once the special skills are unlocked you can indeed get up to 850 points for a single kill. However, not all guards can be killed using them and not all bodies can be hidden. The average number of points for each kill is lower than 850, but is likely still higher than the average for sneaking around.

So yes, it is still more profitable in terms of sheer point numbers to kill everyone you can.

Ofc with most guards you can't manage the petafecta, but the max points/guard you can get is 1500 points.

Undetected = Having a guard walk past you hiding in a door/potted plant/(dangling from you grappling as well I think) or similar. Another trick on some guards that don't stand close to any of those, is if there is a grappling hook spot next to the guard you can usually get this bonus by standing close to him then grappling over his head.

Distracted = Use a distraction item or a lamp (I think it has to be breakable). Just hitting gongs won't work.

Terrorized = Make the guard spot a corpse dangling from a grapple hook or the much easier one, make him spot a corpse when you are using the Nightmare costume.

Fancy Kill = Fancy kills are killing through a vent, making them panic and shoot their buddies, using any ninja tool that kills, might be more ways.

Hide Body = Hide their the guards body in a side vent or drop them down a vent or toss them out of world. There are some other place as well that count, that aren't vents, they generally look like enclosed areas where you can drop a corpse.

For the elite guards and stalkers it's a bit tricker to get a lot of points by fancy stuff, you basically need to have items to stun them, and then kill them and hide their bodies. You can restock items by re-visiting any flag which allows you to re-spec on the map, they will give you full inventory again.

Edit: I just tested doing at well as I could (point wise) on the very first mission. I use Nightmare costume + Terror darts. I managed to get 50k+ points on the first mission basically doing all of the above on most of the guards.

About the undetected thingy. It seams that you can only get it in 2 ways (that I managed at least). Either having them walk past you while hiding in a background object OR jumping just above their heads and them grappling onto something. You can only get this if they are currently not looking for you (they have the ? above their head). But just lure them to a spot (with bamboo darts), wait for the ? to go away, then jump above them and grapple = 200 points ^^

Another tip for the Nightmare costume, is on large building start at the top, kill 1 guard, then start tossing down his corpse 1 level at a time. I did this on the first mission on the big building, killed 1 guard at the top with terror dart, he panicked shot his buddy, then I start tossing the corpse to lower levels, clearing the entire house leaving 1 guard / floor left cause he shoot all his buddies (600 points on friendly fire).

I routinely kill as many soldiers as possible, and I also try to maximize the number of soldiers I terrorize, and the amount of collateral damage they cause.

I know a couple of my friends (Mana in particular) play the game without killing any soldiers at all, and I consistently score higher than them on the leaderboards. 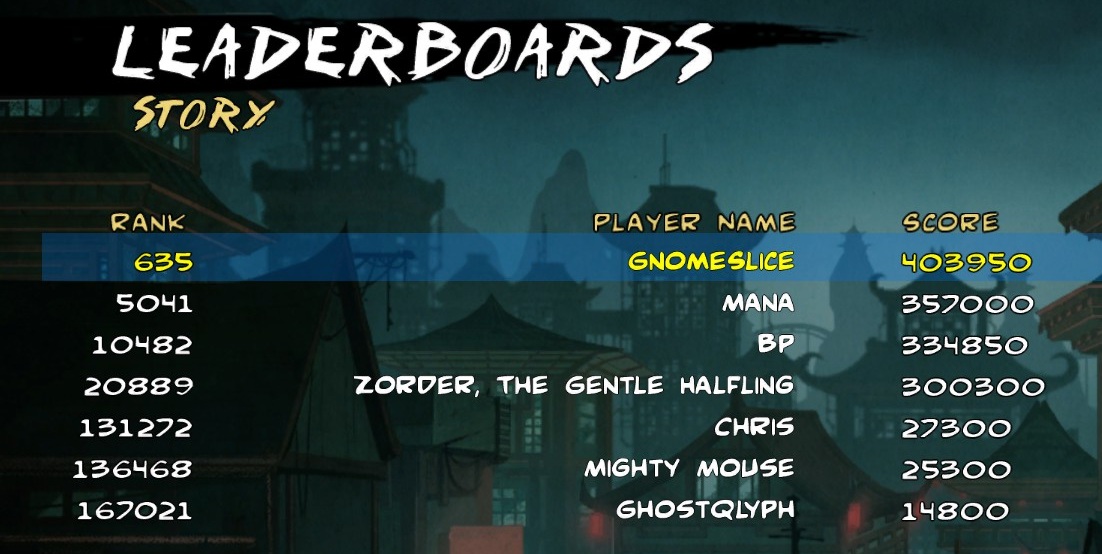 I think this is because there are so many more opportunities to score points if you take the violent route; terrorizing enemies gives you a huge bonus if you do it to as many as possible (even more if you can get them to kill each other), and stashing every body in a hiding place can rack up a score boost as well (+250 each).

I stealthed one level for the achievement, and as I recall my bonuses were much less than when I went around murdering people. Repeatedly.

Your best bet for getting high scores are to get undetected, distracted, and then terrorize them before giving them that special kill...

The last armor you unlock makes this super easy, and the fully upgraded hisomu dart is amazing for crowd control.

Not the answer you're looking for? Browse other questions tagged mark-of-the-ninja .