Is there a way to skip Lorewalker Cho's stories?

I am in the process of finishing my reputation grind for the Lorewalker faction, which requires handing in multiple quests to Lorewalker Cho. 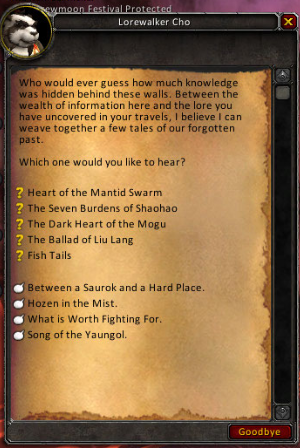 Each quest results in a five minute story about the subject of the quest I'm handing in, which doesn't appear to be skippable, and gives you a debuff; 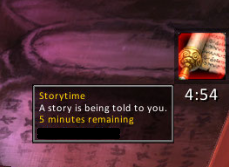 There are like ten quests, so this will take me half an hour if I listen to each of these stories - is there a way to skip them?

The debuff applied by Loremaster Cho's stories can only be removed using abilities such as Divine Shield and Ice Block.

It is, however, possible to remove the debuff by logging out to the character selection screen and then logging back in - or by running far enough out of the Seat of Knowledge. Doing this will cancel the story.

Finally, it is possible to complete multiple quests at once if you're quick enough or using an addon to automatically hand in your quests, this will still trigger the stories for quests handed in (thus resulting in two Loremaster Cho walking around and talking, instead of just one).

You can just leave the building and the debuff will disappear. You can go back in and turn in the next quest immediately.

A side effect of this is that Loremaster Cho is still telling the last story. So after doing this several times, he's telling many stories at the same time, which is kinda silly.

All you have to do is run out of the entrance, tag Chromie, and you can re enter to turn in another. It was kinda cool, I had like 8 of them going at once.