How do I insert symbols in "Games for Windows Live" messages?

I want to add the insert coin symbol (see picture) to my messages in SSFIVAE for PC. The image shows the text message screen on Xbox, which is not available on PC.

How can input the insert coin symbol?

You could use a font that rendered ¤ as the MS Points symbol instead, but both you and the recipient of the message would have to be using the same font. Windows Live uses such a font and you can paste ¤ into the text window or type ALT + 0164 using the numeric keypad (see image). 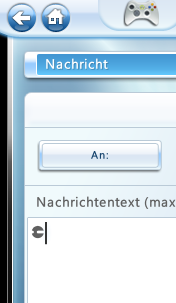 That's actually not an "insert coin" symbol, but rather the symbol for Microsoft Points (the currency used on various Microsoft services, including Xbox Live).

The reason you can't add that character to messages is, as you might guess, because typical PC fonts don't contain a glyph for that. This is also the reason why you don't see it on ASCII character maps.