How many characters can I create in Torchlight 2?

Diablo III has a limit of ten characters, is there a limit to how many characters I can create in Torchlight 2? Right now I have one of every class. I am using there local chest to store class specific gear.

Easy enough to test, or so I thought. My initial approach was to create as many characters as possible, but at a count of 25 I quit: 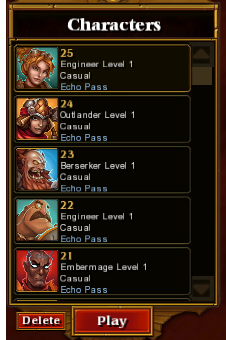 A second approach was to dig in the Runic Games forums and even there, nothing seemed to be found about the maximum amount of characters one can have.

9
Will Torchlight II allow importing characters from Torchlight I?
12
Syncing multiple Torchlight 2 Characters across multiple computers
14
How do I combine gems?
5
What are the limitations of the demo?
9
How do I fish in Torchlight 2?
3
Which stats should I add to as an Outlander using Shotguns/Canons?
3
How can I survive the elite difficulty in Torchlight 2?
3
Torchlight 2 crash message: Unable to determine file type( Best Guess ASCII)
6
Lagging behind in levels, how do I catch up?