Can I control the rate at which new prisoners arrive?

I don't want to be flooded and descend into chaos. I want to build a prison that lasts.

That said, you CAN avoid gaining new prisoners by removing your delivery area next to the road. Just click the Rooms button, and use right click to remove the delivery designation. You still need a delivery area, though, so move it further away from the road. The game logic has no idea where to put the prisoners, so they don't get off the truck, and just continue on. The To-Do List will still show you how many prisoners will get sent the next day, and they'll keep trying. But without that delivery area, they just keep going.

That should allow you to stabilize your current bunch of prisoners without gathering new problems. Once you're ready for new prisoners, just put the delivery area back!

Fun note: your guards will still attempt to escort your "new" prisoners to the holding cell, even when they're on the truck. I had a couple guards chasing the truck until it left the area, so hopefully riots and whatnot are not brewing prior to getting your delivery.

In Alpha 2, as noted by @Crowbeak, any new prisons you create have an option to only send prisoners when you have room for them. For anyone using a save game from Alpha 1, though, this trick still works.

Another thing to note, though, is that your holding cell now counts for how many prisoners you can hold. I believe for every six squares your holding cell has, your prisoner space is increased by one, in addition to whatever cells you have created. So if you have the new option set, keep that in mind.

As of Alpha 2, there is an option when creating a new prison to have new prisoners sent only when there are cells for them.

Now you can open or close prisoner security categories (min, normal, max). If you close them all, you will receive no prisoners that day.

Alpha 30 removed the Continuous Intake option when making a new prison. Instead it has added a new Intake report tab. You can use the Intake tab to control the number prisoners you receive every day as well as the percentage of minimum/medium/maximum security prisoners you get. 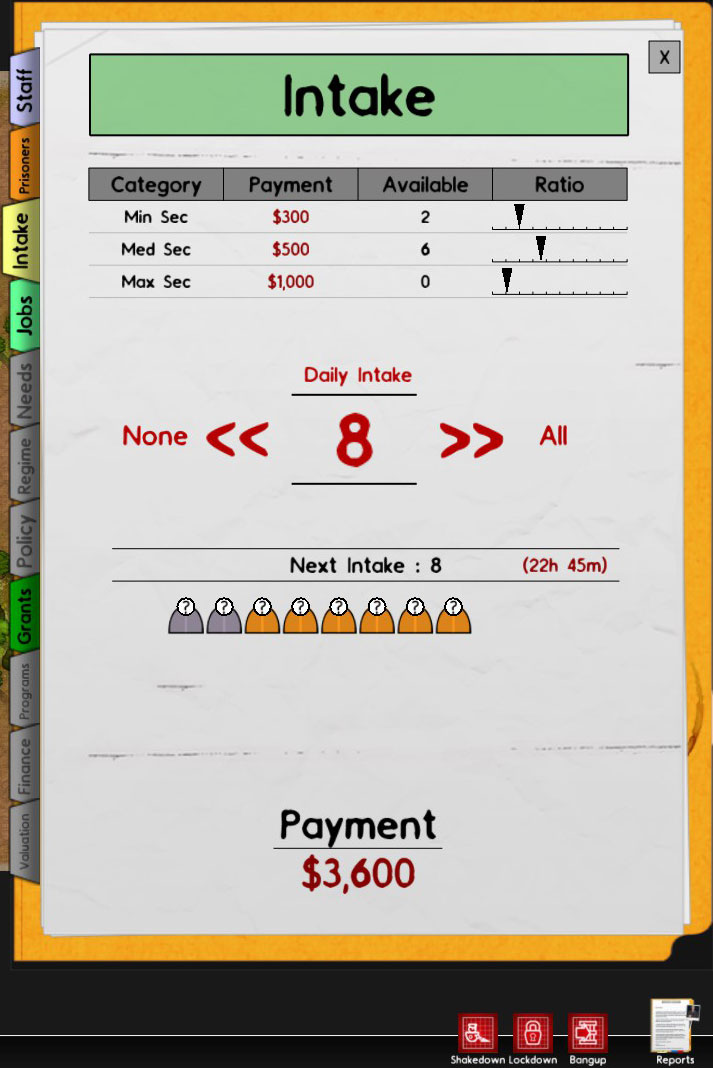 You can see the new intake system demonstrated in the Alpha 30 video.

Alpha 30 also changed the way you get paid for inmates:

You now receive a one-off payment for each inmate you accept into your prison:

You now receive a fixed daily grant of $150 per prisoner, regardless of category.

You can open up the save file with Notepad or something and change "Intake.numPrisoners" to whatever you want (Greater than 0, Less than 1000000). Save the file and exit out of Notepad. Open the game and load the save you just edited.

Not the answer you're looking for? Browse other questions tagged prison-architect .

7
How do I get the new prisoners into my prison?
9
Can I change the controls?
12
Why does my canteen says no prisoners assigned?
6
How do I stop protected custody prisoners mixing with the general population?
6
Building utilities on a wall corner
3
How important is Temperature?
3
How to stop morning Riots?
1
Prison Architect, are prisoners supposed to go outside of their cell to do things?
1
Prison Architect: Campaign Level 3 won't advance