I'm trying to make a two level piston (i.e. when it is powered on it pushes blocks up two levels rather than just one). The way that I am doing it is placing a row of pistons on top of a row of sticky pistons. I've placed a power line to both rows of pistons, and connected it to a switch. My intention is that when the switch is fired on, both rows of pistons get activated. When powered off, they both fall down two their base elevation (they both lose power, so they both retract, and the sticky pistons on the bottom pull the pistons on top down with them).

Sticky pistons can't move certain blocks, such as extended pistons. I'm guessing your second level of pistons aren't retracting early enough and are therefore not completing their retraction before the sticky pistons try to pull them.

The likely solution is that you need to add a delay to your circuitry which allows the upper pistons to retract first, then the lower pistons a couple ticks afterward. The problem with this is that you need them to extend in the opposite way, with the lower pistons extending first and the upper pistons extending afterward. You may have to use an ABBA switch to create this activation/deactivation pattern for you (extend bottom, extend top, retract top, retract bottom).

I ran into this problem myself while designing a portcullis. As gnovice correctly answers, extended pistons are one of the blocks that can't be moved by other pistons. The following redstone diagram was my solution to getting around it. 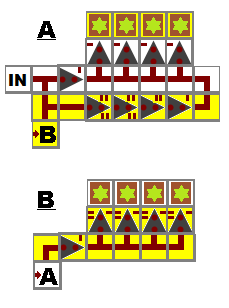 Note; there may be some confusion on piston placement - In [A] the pistons are placed on top of a raised block. In [B] the top of the second layer of pistons is below the raised (yellow) blocks, so that if [A] were to be powered the top of the unpowered [B] pistons would be flush with the surface the redstone sits on.

6
How do I reverse the activation of Pistons with redstone automatically?
0
Redstone NOR gate with one of two inputs adjacent to output
4
Efficient way to power stacked rows of pistons?
1
Minecraft 1.10.2 redstone help. pistons
0
Build a flush 1x2 piston door in Minecraft Bedrock Edition